Full Brunt of Financial Tightening Yet to Materialize: IMF 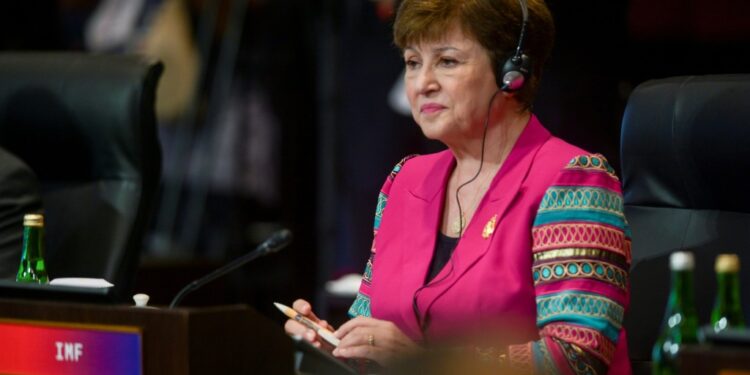 Countries have yet to see the full impact of tightening financial conditions, IMF chief Kristalina Georgieva said Thursday, warning that central banks have some way to go in their inflation battle.

Global growth is expected to slow further this year, as central banks including the US Federal Reserve have raised interest rates to cool surging prices.

While sectors like housing have been reeling in the United States for example, the labor market remains strong with low joblessness.

“As long as people are employed, even if prices are high, consumers spend…. But we all know that the impact of tightening financial conditions is yet to bite, in terms of unemployment,” Georgieva told reporters in a briefing on the world economy.

“Inflation remains stubborn, and in that sense, the job of central banks is not yet done,” she said.

Doing so comes with risks, and Georgieva stressed the need to watch how tightening conditions hit the labor market and possibly translate into “more tensions between employers and workers.”

Governments have been quick to provide policy support thus far, adding a buffer between consumers and surging food and energy costs, but this policy space is “shrinking,” she cautioned.

The International Monetary Fund also expects the global slowdown to “bottom out” towards year-end, and for the world economy to trend towards a higher growth trajectory in 2024, Georgieva said.

The IMF maintains that a “global recession can be avoided” even if some countries see downturns.

But this is subject to an absence of negative shocks like growing social unrest and spillovers between countries, climate events, or a worsening in Russia’s invasion of Ukraine.

“We are now in a more shock-prone world,” she said.

While tighter financial conditions will have a “dramatic” impact on countries with high debt levels, Georgieva said the IMF does not see a “systemic debt crisis on the horizon.”

She added that a new global sovereign debt roundtable is set to meet for the first time in February, on the sidelines of a Group of 20 finance officials meeting, bringing key creditors and private finance together.

Weighing in on specific countries, Georgieva noted that China needs to “stay the course” in reopening from nearly three years of a strict zero-Covid policy that has battered business activity.

China’s rebound from its latest surge in coronavirus cases since recently lifting lockdowns, quarantines and mass testing would have significant implications globally, she said.

The world’s second biggest economy used to deliver up to 40 percent of world growth.

“What is most important is for China to stay the course, not to back off from that reopening,” Georgieva said.

If so, it could turn into a “positive contributor” to average global growth by mid-year or thereabouts, she added.

“It gives some… expectation that the US would avoid falling into a recession,” she said, adding that a potential downturn will likely be very mild.

“For now, the dynamic seems to be more indicative for a soft landing,” she said.

CNN streaming service to shut a month after launch