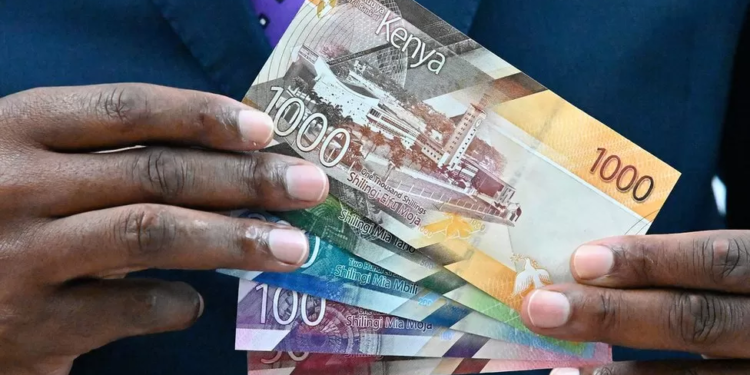 Patrick Njoroge displays some of the new designs for the Kenyan currency notes: IMAGE/Getty Images

The Kenya Revenue Authority (KRA) is proposing to integrate its tax system with M-Pesa, a mobile money platform, in order to monitor and reduce tax evasion.

The 2023 Budget Policy Statement, released by the government on Wednesday for the 2023/24 fiscal year, states that the government is seeking access to individual and companies’ mobile money transaction records as a way to combat tax cheating. KRA is targeting mobile money as part of its financial data gathering scheme to monitor businesses and individuals who are not paying their fair share of taxes. The government aims to increase tax revenues above 17.8% of GDP in the 2023/24 fiscal year, with a targeted collection of Sh3 trillion, and above 18% of GDP over the medium term, with a targeted collection of Sh4 trillion.

If KRA’s proposal is approved, it will be able to compare figures in tax returns with transactions on mobile wallets, flagging differences in remittances on M-Pesa, Paypal, and Pesalink for tax evasion. KRA will store and match data on transaction flow on platforms like M-Pesa, Paypal, and Pesalink, allowing the authority to monitor for consistency and curb tax evasion on incomes from online sources.

Monitoring M-Pesa transactions will also help KRA tax incomes from the informal sector, including online gigs and “side hustles.” Furthermore, data from M-Pesa will force traders who avoid taxes through pay bills to contribute to the national tax basket. Telcos, which had been targeted to share data on mobile money transactions, have previously opposed the move and KRA is said to be in discussion with the firms to access the information.

Last year, President William Ruto announced that every Kenyan citizen in possession of a national identity card will be required to have a KRA pin number in order to increase tax compliance and increase the tax base.

Speaking during the KRA’s Taxpayers event which was held at KICC, President Ruto cited data from Safaricom Telco Company, where about 30 million people are registered under M-Pesa compared to 7 million people who have KRA Pin numbers, and stated that his government would leverage technology to increase the tax base and enlist more taxpayers.

“There are only 7 million people with KRA pin numbers. At the same time, in the same economy, Safaricom’s M-Pesa has 30 million registered customers, transacting billions daily. The fact that this opportunity remains unclear to KRA demonstrates why radical changes are necessary. Every Kenyan with an ID should have a PIN number,” President Ruto said then.

“Technology and a considerate, fair, and professional mobilization will do the job quite well. Safaricom, a telco, has registered more people than KRA, a powerful state organization. It is very clear that the magic lies in technology and strategy, not in power and resources.”