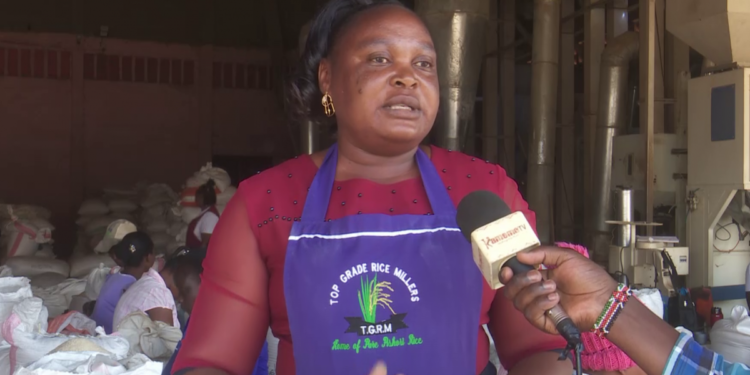 Traders in Mwea have maintained that the prices of rice will remain high until the next harvesting season.

According to rice producers they have experienced tough times in the past two years creating a crisis between the traders and the consumers. They cited climatic changes and cost of production.

The cost of rice per kilogram rose from Ksh.120 to Ksh.180 in the past two seasons.

Mwea Irrigation Rice Scheme which is the largest rice producer in Kenya has been relying on River Thiba for water supply.  The seasonal river supplies enough water once a year allowing the farmers to do a planting one season annually. According to them, the rain in the past two years decreased leading to a drop in rice production.

They noted that the new Thiba Dam will supply adequate water throughout the year hence they will be planting all seasons leading to regular adequate supply of the commodity. Thiba Dam was completed in June and is now operational.

Another major challenge was the cost of production, especially the cost of fertilizers and chemicals. The farmers spent a lot of resources during planting activities, they are supplying to traders at higher prices to recover the expenditure.

Meshack Kariuki, a farmer, urged the incoming government to lower the cost of all inputs. He noted the existence of cheap imported rice in the market is a threat to Kenyan farmers who rely on rice for their income.

“The new government should lower not only fertilizer but all other inputs that directly affect the production like chemicals,”

“The imported rice is everywhere hence consumers prefer it because they are cheap, the government should look into it,” Meshack said.

Purity Muthoni, a trader, said the cost of rice will rise until the month of December since the past two seasons farmers have not been able to grow the product as expected. She added that they don’t expect much drop in December because of the cost incurred on inputs.

“The rice market currently is not favorable. There was a challenge of rain and the few farmers who successfully harvested are supplying to traders at high cost,”

“This forces us as traders to sell to consumers at higher prices of Sh180 to get profit,” Muthoni said

“We expect prices to drop in December immediately after harvesting the current cycle, though it will be a slight drop because the farmers used expensive fertilizer and pesticides,” she added.

Louse Njagi, another trader in Mwea, said the production has not been good in the recent past and urged the consumers not to blame them because of higher prices. She said it is not their wish and hopefully by December they will resume normal prices.

“The situation is difficult now. Consumers are not buying because of the prices. We have to be patient until December when we will harvest,” Njagi said.

Induction Of MPs To Begin On Sunday