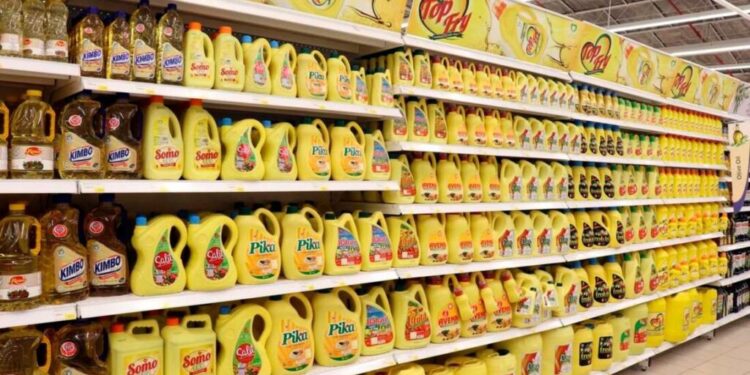 Ten Suspended cooking oil brands by the Kenya Bureau of Standards (Kebs) were still on shelves of retail stores on Sunday despite the regulator directing retail outlets’ umbrella body to retract them.

A spot check by Business Hub shows that most retail stores in Nairobi still have the products on their shelves and consumers are buying them.

“This is to notify your members to recall these brands and remove them from the supply chain from your members’ outlets across the country,” Peter Kaigwara, KebsDirector for Market Surveillance stated in a letter to the Retailers Trade Association of Kenya (RETRAK).

Kebs says the edible oil firms did not comply with the requirements set out in the fortified edible and fats specifications on iron levels, but some manufacturers claim to have met the standards.

“The standard sets out the requirements for iron at 2.5mg/Kg,” said Kebs, but it was not clear whether the iron content was above or below the required standard , and the regulator did not give detailed information on which brands were found with which level or content of iron leaving room for suspicions and accusations of which hunting.

A build-up of iron, known as iron overload, can damage parts of the body such as the liver, joints, pancreas and heart.

With the most affected brands being liquid cooking oil, this could force Kenyans back to the solid alternatives, which carry more health risks.

The order affects the largest manufacturers such as Bidco Africa, Pwani Oil, Kapa Oil and Menengai in a deal that could have repercussions on prices and supply of the essential commodity.

The letter to RETRAK CEO Wambui Mbarire dated Wednesday says the regulator took action to protect consumers from using substandard products in the market. This comes at a time when cooking prices had gone up sharply due to shortages among exporting countries such as Malaysia and Ukraine.

The suspension could hit supply hard given that the majority of the suppliers had earlier been affected in what could further hit supplies countrywide.

In order to defend its products, Pwani Oil Products Limited has claimed that the manufacture of its edible oils and fats has always conformed with industry standards.

Pwani Oil stated, “We again emphasize that our manufacturing process for edible oils and fats has always complied with the best industry practices regarding receipt and storage of raw materials, in-process monitoring, product quality control, and storage of the final product.”

The industry has gone through a testing period since the beginning of the year when supplies were constrained by high demand and lack of transport from source countries alongside exports bans.

After Indonesia threatened to limit palm oil exports, producers of cooking oil, soap, and cosmetics were in April facing a scarcity of raw materials, raising concerns about possible future rationing of the items whose prices have skyrocketed.

Cooking oil prices have increased by more than 30 per cent since the end of last year, and well-known brands like Elianto are no longer seen on store shelves.

Manufacturers issued a warning that it would be difficult to get the essential component in the wake of the surprising decision by the world’s largest palm oil producer to suspend shipments as of this Thursday.

The restriction in Indonesia, according to Pwani Oil, will hurt supply in addition to pushing prices even higher. Kenya imports a lot of vegetable oils, including soybean, corn, and the widely used crude palm oil, primarily from Malaysia and Indonesia, which together account for more than 90 per cent of the world’s supply.

Kenya has become dependent on Indonesia’s palm oil as a result of Malaysia’s weak output during the past six months as a result of labor shortages and flooding.

Cooking oil is also bought in bulk for industrial use in the making of detergents and foodstuffs such as bread.

The shortage of cooking oil, and other food products such as maize, wheat has again brought to the fore Kenyans chronic food shortage and over dependency on imported food despite a galore of locally grown alternatives such as potatoes, sorghum among others.

State and Religion: Why the Church in Kenya Has Failed