Aden Duale Plot To Bundle Him Out 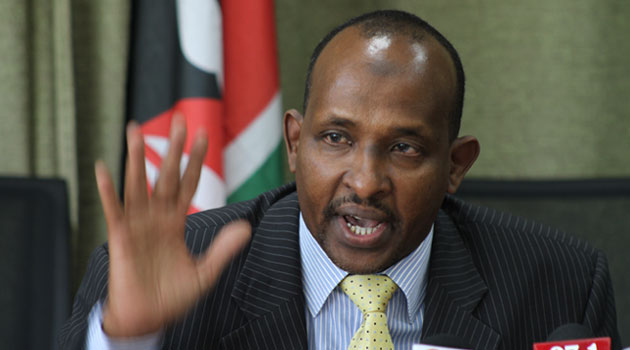 This is after reports emerged on Wednesday evening that Kega, who chairs the Committee on Trade, Industry and Cooperatives, was collecting signatures to impeach Duale.

Duale, who has served as majority leader for seven years, retained his yesterday as perceived errant MPs lost their seats during a Jubilee Parliamentary Group meeting hosted by President Uhuru Kenyatta at State House, Nairobi.

The seasoned politician has now termed as malice the alleged plot by the Kieni MP to impeach him a move he says goes against the President’s wish for him to continue serving the party interests in the House.

In a statement, Duale, who says the president spared him in the Tuesday purge over his exemplary performance, claims that Kega is a known extortionist who uses ouster threats to blackmail his targets for favors.

“He is notoriously known for being the king of extortion who thrives in threats and blackmail. He has perfected the art of extortion so well that all he does is to purport to collect signatures only for him thereafter to solicit for favors from myself and my friends as a bait for withdrawal of signatures, ” said Duale.

Vowing not to bow to Kega’s threats, Duale said, “Unfortunately, we are used to his antics and threats and we are not boarding.”

“His tricks, unfortunately, has even killed the Committee on Trade one of the most important Committee in the House to which he chairs. Members cannot be led by an extortionist and as a result attendance is nearly zero and has rendered the Committee as dead as a dodo.”

Duale said that being a second-term MP, Kega should better understand the process of removing a majority leader in Parliament. He termed the move to collect signatures in a bid to initiate an ouster motion against him as “feigning ignorance”.

“The National Assembly Standing Order 19 is clear on the process for removal of a Majority Leader which is by a majority of votes of all Members of the Majority Party in a Parliamentary Group chaired by the Party Leader and the decision thereafter is communicated by the Majority Whip to the Speaker. There is no place for collection of signatures. In any case, the process was already completed yesterday in the Parliamentary Group chaired by H.E The President to which Hon.Kanini Kega also attended, ” he said.

“What Hon. Kanini Kega is however doing is to lie to his colleagues through unknown procedures that he can still have a say in the removal process when he is just playing his usual extortion game.”

Kega was among a list of Kieleweke members who were pushing for the removal of Duale as majority leader for being sympathetic to Deputy President William Ruto’s 2022 Presidential ambitions.

He and his Kipipiri counterpart Amos Kimunya were touted as “perfect” replacement for Duale.

Duale now says the MP could be acting out of frustrations after the President denied him the chance to occupy the plum position.

“I am also aware that Hon. Kanini Kega may be also shedding tears of loss and nursing disappointment having believed in his mind that he was to be the next Majority Leader,” said Duale.

“Yesterday, Jubilee Parliamentary Group meeting, however, made his dreams end in a bang. Hon. Kanini Kega, please note that being a Leader of Majority is not as easy as ABCD. It takes zeal, hard work, servant leadership, expertise, professionalism, experience and having the people of Kenya in your heart. Question is if you killed the Committee on Trade which you chair through incompetence can you handle the position of the Leader of Majority Party?”