by Carol Mwanzia
in Health
0 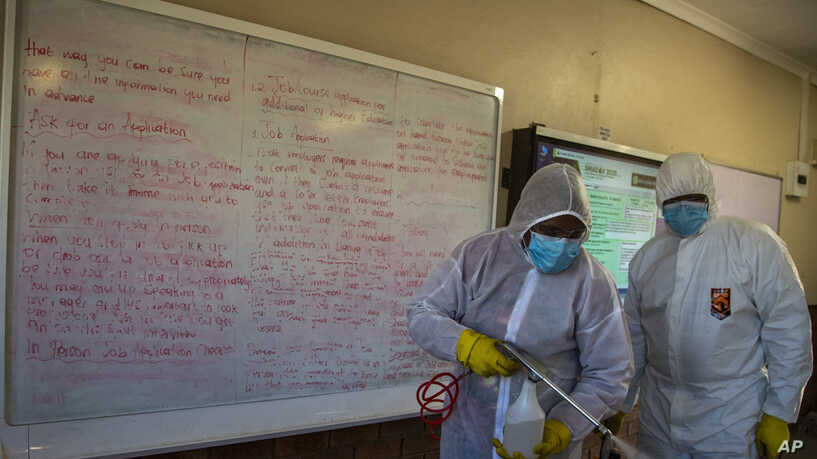 Disinfection team disinfect a classroom at Ivory Park Secondary School east of Johannesburg, South Africa, Thursday, May 28, 2020, ahead of the June 1, 2020, re-opening of Grade 7 and 12 learners to school. Photo credit (AP Photo/Themba Hadebe)

AFRICA – COVID-19 or corona-virus, as medical experts like to say, doesn’t care about borders, or language, or any of the cultural aspects of humanity. Like viruses the world over, it just sees targets. But since the virus appeared on the African continent three months ago, it has taken a different course in different countries. The continent recently reported 100,000 positive cases, but they’re spread unevenly. South Africa leads the continent, with more than 25,000 cases and rapid growth, whereas the small tropical island of Mauritius hasn’t seen a new case of local transmission in more than a month.

Meanwhile, countries such as Rwanda and Uganda that have previously sparred with epidemics have reported cases in the hundreds, but no deaths.

Dr. Matshidiso Moeti, the World Health Organization’s regional director for Africa, said the organization is training more than 10,000 health workers in an attempt to decentralize their response to deal with these different realities.

“Most countries still have fewer than 1,000 reported cases,” he said. “This means that as governments ease lockdowns and other social measures, it’s important that strong public health measures are in place all over the territories, not just in the capital cities; AND that communities are empowered and enabled to take preventive actions. And that we continue working on strengthening health systems and delivering essential services to people.”

In Mauritius, the nation’s minister of health and wellness, Dr. Kailesh Kumar Singh Jagutpal, said preparation was key to the nation’s response, and its apparent success in containing the virus.

“Mauritius registered the first cases of COVID-19 in March. Our monitoring and preparedness action plan was in place already since mid-January,” he said. “The Mauritian prime minister himself chairs a high-level committee on a daily basis. This allows the government to have daily updates on the evolution of the pandemic and implementation measures.”

Despite seeing rapidly growing clusters of the outbreak, South Africa recently announced a new approach: Houses of worship will now be allowed to reopen, with precautions and limited congregation sizes. That, Health Minister Dr. Zweli Mkhize explained, is part of the strategy — deputize trusted institutions, like churches, to teach South Africans how to live with the virus in the long term.

“It’s become clear that we are likely to have this pandemic for more than a year, maybe even two years. And therefore, it is important for us to understand that there is a degree of easing … and in this process … begin to motivate every part of our society to focus on social and behavioral change,” Mkhize said.

And in the East African nation of Uganda, which has yet to report any deaths amid its fewer than 300 cases, Health Minister Dr. Jane Aceng said the health system was already well-fortified by other lethal epidemics.

“Uganda has had [the] opportunity to have several outbreaks. From the year 2000 to date, at least, we have had over six Ebola outbreaks and about five Marburg outbreaks, and several other outbreaks,” she said. “And these outbreaks have given us the opportunity to build capacity, but also to build systems in place which can easily be activated to respond to epidemics as they are occurring.”

Moeti, the World Health Organization official who said that cases in Africa remain lower than in other parts of the world, said one thing holds true across this continent: The virus doesn’t let its guard down in its quest to survive. And so, she said, we shouldn’t either.

KRA Moves to Court to Block Order to Reopen Keroche