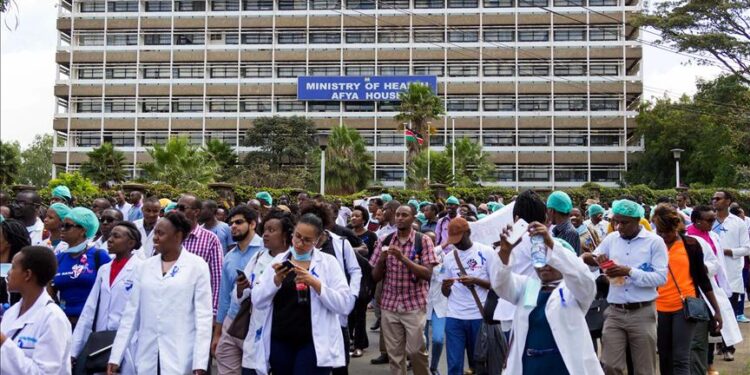 Over 700 doctors strike over suspended colleague in 2018 Photo Courtesy

Doctors have decided to end their strike which was meant to begin on Friday January 6, giving dialogue a chance.

The health workers had requested that their 2017-2021 CBA demands be met or else they would withdraw their services.

Some of their grievances include salary adjustments, creation of call rooms, posting of medical interns, employment of jobless graduates, provision of working tools and constant consultations that would create industrial harmony.

Dr Davji Atellah, who is the Secretary General for The Kenya Medical Practitioners, Pharmacists and Dentists’ Union, said they are opting for a more peaceful and organized way of ensuring their demands are met.

Speaking at the union offices on Thursday, Atellah further said the government has shown commitment to address the issues, which will be investigated before March 5.

“We are far from having an agreement, but we are willing to give dialogue a chance. We extended an olive branch to the government to enter into the engagement with goodwill,” he said.

Holding talks with the Health Cs Susan Wafula, the Council of Governors health committee and the Labour health committee, the Union came to the decision to suspend the strike and give dialogue a chance.

They decried stalled implementation of the agreement by the Ministry of Health, county governments and parastatals in the health sector.

“Poor Timing and Miscommunication,” Kindiki On Why He Missed Gachagua’s Unveiling