India’s Covid death toll past 200,000 as it suffers worst day of pandemic with record number of cases and deaths 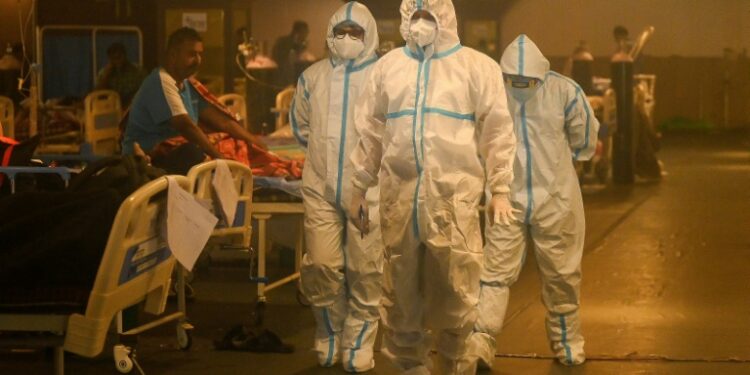 India’s coronavirus death toll shot past 200,000 Wednesday as a relentless wave of new cases swamped hospitals and sent desperate families out into the streets of the capital in search of oxygen supplies and medicine.

Infection and death rates are soaring in the vast country of 1.3 billion, in contrast with the United States and some European nations which are taking tentative steps back towards normal life.

The virus has now killed more than 3.1 million people worldwide, with India driving the latest surge, recording 360,000 new infections — a global record — and more than 3,000 deaths on Wednesday.

Offering a glimmer hope, the co-founder of BioNTech — which developed a Covid-19 vaccine with Pfizer — said he is confident the shot works against the variant that is plaguing India.

In the capital New Delhi, car parks have been converted to crematoriums and the soaring body count has sparked a shortage of wood for funeral pyres.

Desperate relatives of the sick are crowding outside hospitals and pharmacies in search of treatment and medicines, often in vain.

Arriving in cars, rickshaws and ambulances, patients and their families desperate for oxygen flocked to a tent outside a Sikh place of worship on the outskirts of the capital this week.

Priyanka Mandal, 30, had been searching for oxygen for her mother since she became sick a week ago.

“No matter how much time it takes, I have to wait here… I only have my mum.”

Auspicious’ full moon
Despite the rising cases, on Tuesday around 25,000 people took part in the final bathing day at the Kumbh Mela religious gathering in the northern town of Haridwar, drawn to the banks of the Ganges by an “auspicious” full moon, festival official Harbeer Singh told AFP.

The gathering has attracted millions of pilgrims, mostly without masks, sparking criticism of Prime Minister Narendra Modi’s Hindu-nationalist government for allowing it to go ahead.

A variant of the virus feared to be contributing to the catastrophic wave in India has now been found in more than a dozen countries, the World Health Organization said Tuesday.

But the WHO has stopped short of declaring it a “variant of concern”, which would have indicated that it is more dangerous than the original version of the virus by, for instance, being more transmissible, deadly or able to dodge vaccine protections.

Many nations have rushed to help, sending desperately needed oxygen and aid.

As part of the global effort, Singapore said Wednesday it had sent two plane-loads of oxygen supplies.

India also appears to be a leading contender for some of the millions of AstraZeneca vaccine doses the United States has said it will export.

And Ugur Sahin, the co-founder of BioNTech, said the vaccine his company jointly developed with Pfizer appears to protect against the Indian variant.

Terrific news
Governments are hoping that vaccines will be the way out of the pandemic that has crippled the global economy and upended billions of lives.

The EU is eager to speed up its sluggish immunization drive after it sued the British-Swedish firm AstraZeneca for allegedly breaking their purchase agreement.

The EU and the pharmaceutical giant are set to meet in court on May 26, a Belgian court said Wednesday.

In brighter news on the vaccine front, new research out of Britain showed that just one dose of the Pfizer or AstraZeneca vaccines reduces the chances of household transmission by up to 50 percent.

“This is terrific news –- we already know vaccines save lives and this study is the most comprehensive real-world data showing they also cut transmission of this deadly virus,” British Health Secretary Matt Hancock after Public Health England released the findings.

In Japan, organizers of the Summer Olympics said athletes and their close contacts will have daily coronavirus tests — an increase from a previous plan that called for tests every four days.

The announcement came after the Australian government said that an estimated 2,000 athletes and staff would get vaccinated before travelling to the Games, which are scheduled to begin on July 23.

The Olympic organizers also said they won’t decide until June how many spectators — if any — can attend the Games, with chief Seiko Hashimoto warning that “as of now, having full venues is very difficult”.

Japan is eager to host the Olympics after the pandemic forced them to be delayed last year as lockdown orders set in around the globe.

Not all sectors were hard hit by global shutdowns, however.

Sony announced its biggest-ever annual net profit Wednesday, driven by unprecedented pandemic-fueled demand as people around the world turned to gaming to liven up lockdowns.

Rwandan woman finds herself in court for genocide after being deported from the U.S