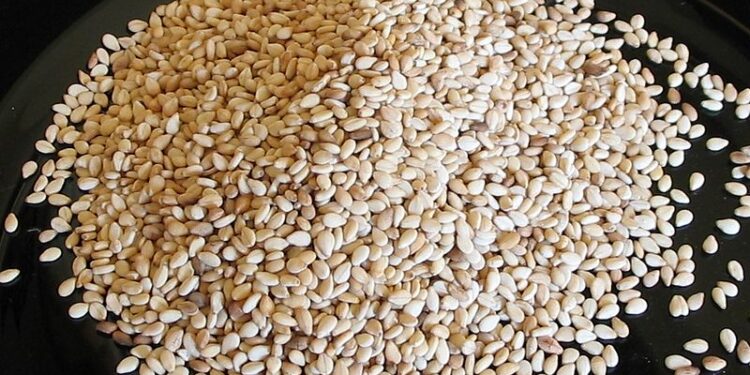 Sesame is a seed of the sesame plant, an annual herb with foxglove-like flowers that produce pods containing the edible seeds.

The Sesame plant is said to have originated either from Asia or East Africa, and ancient Egyptians are known to have used the ground seed as grain flour.

The several varieties of Sesame available can grow from about 0.5 to 2.5 meters tall; some have branches, others do not. From the one to three flowers that appear in the leaf axils, hulled seeds are creamy, about 3mm long with a flattened shape. The seed capsule opens when dry and the seeds scatter or one can hire people to harvest to prevent loss.

The seeds come in white and black varieties, where the prior can be used in all dishes calling for sesame seeds as it has a delicate flavor, while the latter, which has a stronger aroma, is used alongside other ingredients so as not to overwhelm the dish.

The Chinese used sesame seeds at least 5,000 years ago, and for centuries they have burned the oil to make soot for the finest Chinese ink blocks. History also shows that Romans used to ground the seeds with Cumin to make a pasty spread for bread.

Sesame oil is used as a cooking oil, in manufacture of soaps, in shortening margarine, to manufacture pharmaceuticals, lubricants and as an ingredient in cosmetics.

Sesame seeds are a reliable source of plant protein, helping build everything from muscles to hormones. In approximation, Sesame seeds supply 5 grams of protein per 3-tablespoon (30-gram) serving. Roasted sesame seeds provide a higher amount of protein, as the roasting process reduces oxalates and phytates — compounds that hamper your digestion and absorption of protein. Sesame seeds are high in methionine and cysteine, two amino acids that legumes don’t provide in substantial amounts, and low in lysine, an essential amino acid more abundant in animal products which vegans can compensate by consuming high-lysine plant proteins.

Research shows that sesame may help lower blood pressure as it is rich in magnesium. Further, lignans, vitamin E, and other antioxidants in sesame seeds may help prevent plaque buildup in your arteries.

A study showed that “when 38 people with high blood lipids ate 5 tablespoons (40 grams) of hulled sesame seeds daily for 2 months, they experienced a 10% reduction in “bad” LDL cholesterol and an 8% reduction in triglycerides compared to the placebo group” trusted source. With this evidence, one can conclude that sesame might help lower chances of heart disease caused by risk factors such as high cholesterol and triglycerides.

Sesame seeds, however, have joined the list of allergen foods, as confirmed by the US Food and Drug Administration.

Regarding the Food Allergy Safety, Treatment, Education and Research Act, or FASTER Act, which was signed into law in April 2021, the seeds are now allergens by law.

Foods containing sesame will be subject to specific food allergen regulatory requirements, including those regarding labeling and manufacturing.

According to FDA’s website, inspections, and sampling of food products to check that major food allergens are properly labeled on products and to determine whether food facilities are preventing allergen cross-contact.

The FDA has been reviewing whether to put sesame seeds on the major food allergens list — which also includes milk, eggs, fish, crustacean shellfish, tree nuts, peanuts, wheat, and soybeans — for several years.

Many companies have already started the process of labeling their products, but it could take three to six months for foods currently on shelves to get sold.

“We remind consumers that foods already in interstate commerce before 2023, including those on retail shelves, do not need to be removed from the marketplace or relabeled to declare sesame as an allergen,”

“Depending on shelf life, some food products may not have allergen labeling for sesame on the effective date. Consumers should check with the manufacturer if they are not sure whether a food product contains sesame.” the FDA said in a December 15 statement.

Tunisians Dream of Moving to Germany as Crisis Bites