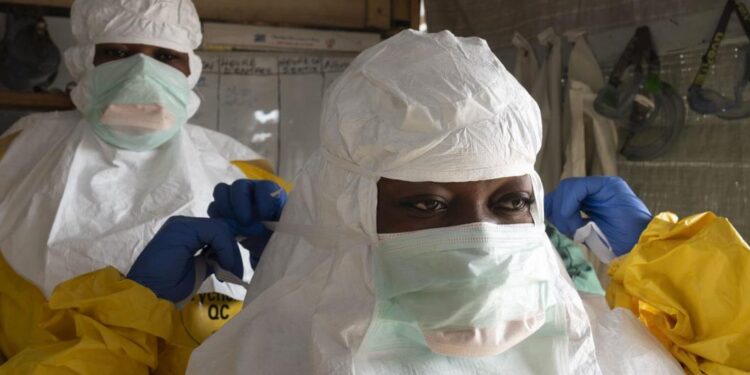 Health staff in Uganda are reluctant to work in the Ebola isolation unit for fear of contracting the dangerous virus.

When Ebola broke out in Uganda in September, 10 doctors immediately stepped forward to work in an isolation unit at Fort Portal Regional Referral Hospital, but now only three are left.

The virus circulating in Uganda is the Sudan strain of Ebola, for which there is no proven vaccine. Total recorded cases have reached 141, with 55 dead.

“At the beginning the number of health workers willing to work in that unit was good but now we have low coverage. If we get five cases the work, we do is overwhelming,” said one doctor.

In Uganda, 15 health workers have tested positive for the virus and six have died.

Doctors have had problems with long working hours, delayed payments, and shortage of staff.

Uganda has one of the world’s lowest doctor-to-patient ratios, with one doctor for every 25,000 people, versus the one-to-1,000 ratio recommended by the World Health Organization (WHO).

The World Health Organization together with the United States government has been channeling millions($22million) to Uganda after the Ebola infections soar.

Uganda still faces significant funding shortfalls — a WHO official said an initial $20 million the government earmarked was burned through in the first month.

According to Dr. Alone Nahabwe, the Uganda Medical Association’s head of worker welfare, Ebola has crippled the staff coverage.

“There are facilities where doctors and health workers are still touching patients without gloves because they (gloves) are not there,” Nahabwe said.

Children With Disabilities In Coast To Benefit From Inclusive Education