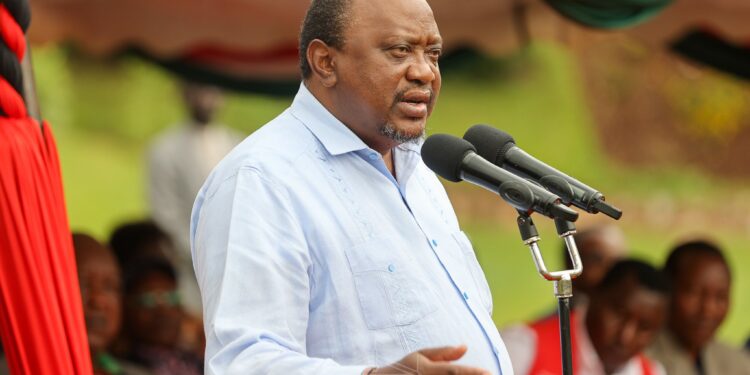 President Uhuru Kenyatta has reiterated the need for Kenyans to move forward together peacefully as the August 9th General Election approaches.

The Head of State emphasized that Kenyans should embrace peace at all times, saying they should shun leaders who preach divisive politics and hatred.

In this regard, President Kenyatta urged residents of Kisii and Nyamira to elect leaders allied to the Azimio La Umoja-One Kenya Alliance led by presidential candidate Raila Odinga and his running mate Martha Karua who have the interest of the country at heart.

President Kenyatta spoke on Wednesday when he addressed a mammoth public rally at the Gusii Stadium in Kisii town that was attended by people from Kisii and Nyamira counties.

The President, who had earlier held a leaders meeting at the Kisii State Lodge, also urged political leaders to conduct peaceful campaigns without scaring voters.

He said the development momentum the country has gained will not be disrupted if Kenyans put the interests of the country above personal gains.

“To succeed, you must be a team. People must work together if you are to succeed. We have been able to work together all along… and that is how we want to continue building the unity of this nation.

“There is no one tribe that alone has the capacity to develop this nation. The country belongs to every citizen regardless of where he or she comes from. We must be equally regarded and respected,” President Kenyatta said.

He restated that his intention has always been to unite Kenyans as well as ensuring equity and inclusivity.

At the same time, President Kenyatta thanked Kisii and Nyamira residents for supporting him throughout his tenure, saying their steadfast support enabled the National Government to implement a wide range of projects that have transformed the region.

“It has been a pleasure for me to work together with you, we have achieved what we could have. On the side of roads, we have tarmacked 200 kilometers in these two counties.

In this connection, President Kenyatta expressed optimism that the next Government will continue working to uplift the lives of Kenyans to higher levels.

“Work does not end, you do what you can and leave others to continue because it is just like that. The life of a nation is a continuous process, but the most important thing is that it must be a process where people move together,” President Kenyatta said.

Local leaders including Kisii Governor James Ongwae and his Nyamira counterpart Amos Nyaribo thanked President Kenyatta for his visionary leadership that ensured the regions achieved significant progress during his term in office.

Names Of Candidates Disqualified By IEBC