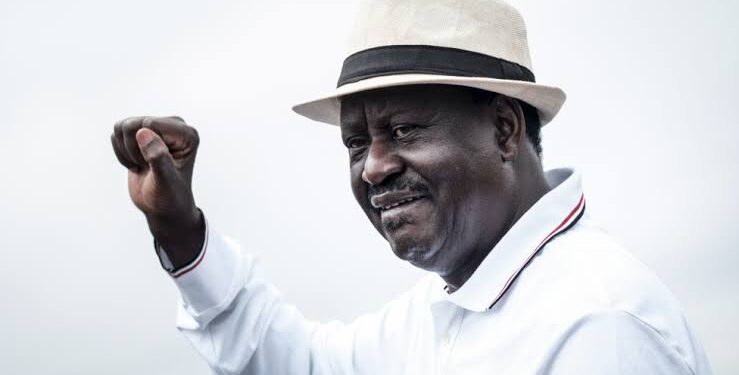 During the Azimio grand rally at Bukhungu stadium in Kakamega on Wednesday, August 3, Raila said the Firimbi movement is a rallying call to his supporters to turn out in large numbers and vote for him.

Moreover, the ‘Firimbi movement’ concept is derived from the Swahili name for whistle. The movement was famous sometimes back during his campaigns.

Additionally, Mr. Odinga noted that a whistle ‘Firimbi’ is used to alert a group of people to act. Hence using it in his last call to his supporters will act as a cue to rally a large voter turnout next Tuesday.

“I want to hear an announcement after the elections that Baba and Mama are leading against Ruto and his deputy. Today I am launching a new chapter called the Firimbi movement,” Raila told the crowd.

“There are two instances where a whistle is blown, one is to wake people up so that they go and vote and another one to chase away thieves,” he stated as he subsequently illustrated the whistle blows.

Furthermore, the Azimio leader warned Kenyans against voting for William Ruto, claiming that they will be opening doors to a graft-centered government.

Likewise, argued that he is the best candidate to succeed incumbent President Uhuru Kenyatta as his government will be seeking to bring reforms to the nation.

“We have five days left, please vote for us because a vote for Azimio is a vote for liberation as opposed to a vote to Kenya Kwanza which will be one to endorse graft,” said Raila.

Nonetheless, Raila Odinga used the Firimibi Movement slogan during the 2017 political campaigns while contesting for the presidential seat under an Orange Democratic Movement (ODM) ticket.

Body of Tom Okwach Retrieved From Abimbo Mine, Seven Months After Tragedy