‘We Are All Set,’ OKA Coalition Principals Say As They Sign Coalition Deal

by Linda Amiani
in KENYA ELECTIONS 2022
0 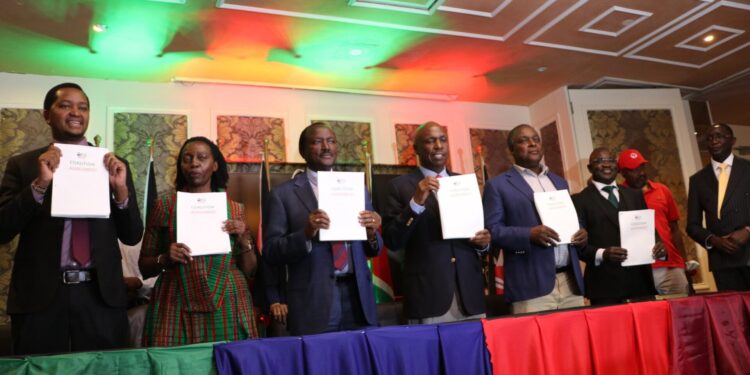 The One Kenya Alliance (OKA) Principals have officially signed a coalition deal that will see their respective political parties forge a strong unity ahead of the upcoming August General Election.

The Farmer’s party led by Irungu Nyakera and the Movement for Democracy and Growth (MDG) party led by Ugenya MP David Ochieng also joined the One Kenya Alliance in signing of the agreement on Friday.

Addressing the press during the signing of the agreement, OKA principals said they were all set to partner with like-minded political formations, insisting that any further partnerships would be done in a transparent and open manner.

SC Martha Karua also stated that the coalition was also ready to field its candidate and go it alone in the August elections.

“We are going to build from strength to strength and OKA will demand from other coalition partners openness. We will tolerate opaqueness. We will not play second fiddle. We go in as equals and we discuss as equals.

“And even within OKA if we decide, as we might, to field a presidential candidate we will cede to one out of mutual agreement. If we go to a larger coalition, we don’t want to be told this is predetermined,” she said.

“This journey we are going we know where it will culminate but the primary reason for this journey is the people of Kenya…. We live in dire situations today but I do believe in the team of OKA. Each of these OKA principals has something to add to the building blocks of the solutions for the people of Kenya,” said Moi.

On the other hand, Wiper leader Kalonzo Musyoka echoed Karua’s sentiments terming OKA a powerful force working on a possibility of working with other coalitions or going it alone in the upcoming polls.

“We are going to have to form one Juggernaut. We taked about the possibility of a grand coalition but we have our coalition here and we are set. If others don’t want to engage. We are ready to go to the wire. We are set with the instruments but we are ready to have a dialogue,” said Kalonzo.

The signing of the coalition’s agreement comes just a day to the Azimio la Umoja’s  National Delegates Convention (NDC) that will be held on Saturday.

Ruto Presides Over Swearing-In Of 6 Judges