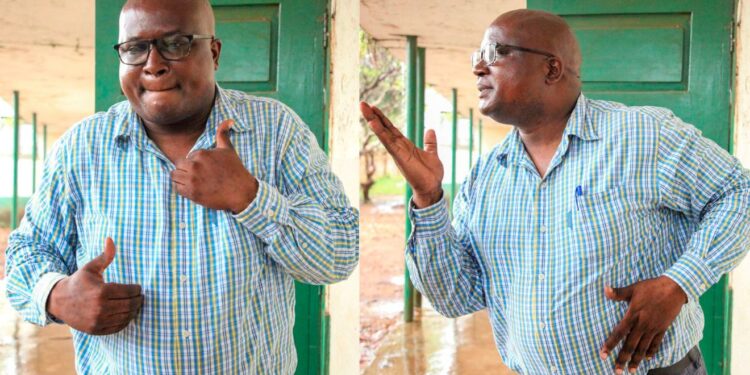 John Ogilo Migun, the Kisumu Assistant Chief whose dance video went viral shows the nation team some of his dance move during an interview at Xaverian Primary School: IMAGE/Courtesy

Mr. John Ogilo Migun, a chief from Kisumu known for his dancing skills, has been given a new role in the government.

The 38-year-old Northern Sub Location assistant chief in Kisumu Central Sub-County has been selected to promote the services of Huduma Kenya, in addition to his duties as an administrator.

In a video filmed at the entrance of Kisumu City’s Prosperity Building, Mr. Migun is seen informing the youth about the government services available at the Huduma Centre. Dressed in a Huduma Center-branded white shirt, he urges the public to take advantage of the extended working hours to access the center’s services.

“Sasa watu nguyaz, mabazuu na mayutman, services sasa ni saa moja asubuhi hadi saa moja jioni. Unatoka job, colle, ama works zako zingine unaingia Huduma Center na baada ya hiyo saa majo unaenda kutulia (Greetings my people and the youth, you can now access services here from 7am until 7pm. You can leave your workplace, college or any other engagements and you come directly to our Huduma Centres, and after that, you go and chill),” said Mr Migun.

Also Read: Michelle Ntalami Denies Nothing about her Relationship with Fena Gitu

Neither Mr. Migun nor Kisumu County Commissioner Josephine Ouko could confirm the new role but stated that they are awaiting communication from the Office of the President. The Prosperity Building houses the Huduma Centre as well as other county and national government agencies.

Recently, the government extended the working hours from 5 pm to 7 pm, fulfilling a promise made by Public Service and Gender Cabinet Secretary Aisha Jumwa on November 1st of last year.

Mr. Migun gained fame after a video of him dancing at a popular nightclub in Kisumu went viral. He has since been dubbed the “Mindoko chief” and has promised to reach out to youth to curb drug abuse and alcoholism.

“Since the video went viral, many people have been coming to my office to give important information on security matters,” he says.

“Chiefs are more modern now, unlike in the olden days when paramount chiefs caned their subjects. The youth are finding it easier to relate to someone like me,” says Mr Migun.

“Parents should support their children to pursue what they are good at, including taking music courses. Supporting such initiatives will really go a long way in dealing with the mental health issues as well as empowering the youth to make money,” says Mr Migun.

He currently coaches college and school basketball teams, including Maseno School’s team, and is a certified coach by the International Basketball Federation (FIBA).