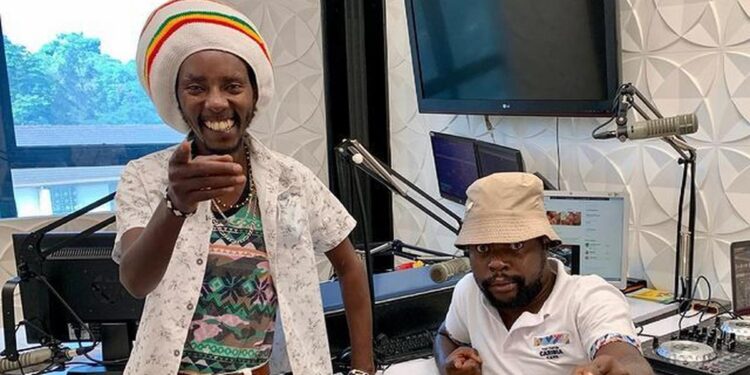 Mbusii and Lion are some of Kenya's biggest radio hosts. Photo: Radio Jambo/Instagram.

Radio Jambo fans have been left at crossroads after a segment from one of the station’s favourite shows Mbusii Na Lion Teke Teke was suspended.

The Kenya Times has learnt Toboa Siri, a segment on Mbusii Na Lion Teke Teke that gave listeners to share their deeply kept secrets anonymously has been suspended.

According to Mpasho, the segment was suspended after getting on the wrong side with the government.

Mbusii, the lead host of the show disclosed that the segment had to be suspended after a caller shared a secret touching the National Government.

The radio host stated that the leaked secret is the main reason they got in trouble with the government.

Mbusii, however, noted that the Toboa Siri segment is under review as they wait for word from the government on whether it should air again or not.

“The National Government asked us to suspend the show. There was a ‘secret’ by a caller that got us in trouble. The show is being reviewed. We will just put them in the achieve as we wait for the government’s decision.” Mbusii said.

To confirm their current predicament, Lion who co-hosts the show alongside Mbusii said he had earlier warned that the show would land them in trouble.

“I had warned you that this would land you in trouble or make the show get closed.” Lion said.

Mbusii Na Lion Teke Teke is one of the most popular radio shows in Kenya and commands a massive following both online and offline.

The two hosts, Mbusii and Lion initially worked together at Ghetto Radio before being poached by Radio Africa Group.

“Don’t Send Away Students Over Fees,” Magoha to Schools