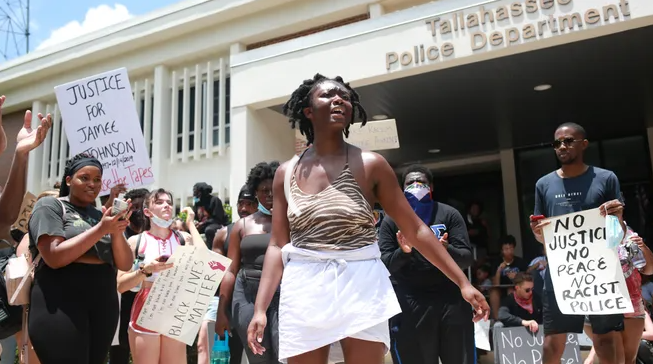 Oluwatoyin Salau, a 19-year-old protester who begged for justice in the wake of Black Lives lost, has died. Police and her family confirmed the death Monday morning. Salau was found dead Saturday night after she went missing more than a week ago, on June 6.

Salau was one of two homicide victims discovered Saturday night in Southeast Tallahassee, FL a couple miles from where she was last seen at a library.

Victoria “Vicki” Sims, 75, who also had been reported missing, was the second victim. She was a retired state worker and grandmother well-known for her volunteerism and work in local Democratic politics.

Police identified the suspect as Aaron Glee Jr, 49, who had been arrested twice recently for violent offenses.

However, investigators have not released a motive or any other details about what led to the double homicide.

“There is no justice that can be served that will replace my sister’s life,” her brother, Oluwaseyi Salau said.

The last time Danaya Hemphill saw her friend was the day before she went missing. They were at a Friday afternoon protest. “We were all together one minute and the next minute our friend was gone,” Hemphill said.

Hemphill felt a heavy unease in the days after her friend was reported missing. “I had a feeling that we were not going to find Toyin alive,” said Hemphill, 22.

At each demonstration, Salau had been reciting the names of Black people killed, such as Tony McDade of Tallahassee and George Floyd of Minneapolis.

“I don’t want their names gone in vain,” Salau said during one protest in front of the Tallahassee Police Department last month. “I had a feeling that we were not going to find Toyin alive,” said Hemphill, 22.

Hemphill didn’t think her friend’s name would join that list.

“Toyin was very passionate,” said Hemphill. “She was very vocal she was very loving, very spiritual, very caring. She was like a light in a dark room. That was Toyin.”

Though she went missing June 6, newly surfaced surveillance footage shows on Wednesday, June 10, Salau walked into Big Easy Snowballs in Tallahassee, according to owner of the ice cream shop. She asked to use the restroom.

That was the last known day she was seen alive.

“I don’t know what in the world happened to Toyin,” said Hemphill.

“She Kept Crying”
In the hours before Salau went missing, she tweeted she had just been sexually assaulted.

The afternoon she went missing, Salau tweeted a man molested her that morning around Park Avenue and Richview Road. She said the man offered to give her a ride back to a church where she had sought “refuge” because of “unjust living conditions.”

“He came disguised as a man of God and ended up picking me up from nearby Saxon Street,” she tweeted. “I trusted the holy spirit to keep me safe.”

Salau said she called police after the assault happened. She did not specify the church where she had been staying.

Several people replied to her on Twitter offering help and asking whether she was OK. She never responded.

Her close friends say that wasn’t the only time she was molested.

Salau was also molested a few days before she went missing, Hemphill and two other friends said. They met up with Salau at the church where she’d been seeking refuge.

“That Thursday she went with me to the church, she talked to a lawyer, she spent a while there,” said friend Ashley Loray. “She kept crying.”

Along with police officers, Salau and friends went to the house where she’d escaped from near Florida A&M to gather her belongings. She’d been a victim of sex trafficking in that house multiple times, her friends say.

A disoriented and sobbing Salau shuffled into the house with her friends and scooped up her belongings.

“I personally feel like they could have investigated and gotten DNA.” said Loray. “That’s where they failed her. She could still be alive.”

The cop told Loray they would need to gather more evidence on the assault.

That night, she slept in Hemphill’s bed.

Glee Arrested Twice Before Murders
Glee was arrested May 29 on a charge of aggravated battery after an officer stopped at a light spotted him kicking a woman in the stomach, according to police reports.

The victim in that case was neither Sims nor Salau.

The woman told police she and Glee had been drinking alcohol together and were walking down the sidewalk when he propositioned her for sex.

“She told him no so Glee became angry, shoved (her) to the ground and began kicking her in the abdomen,” the police report says.

Online Leon County Court records show a misdemeanor battery charge filed against him June 6. However, those reports were not immediately available.

Glee was arrested last year on a charge of possession of marijuana. However, prosecutors dropped it, according to court records.