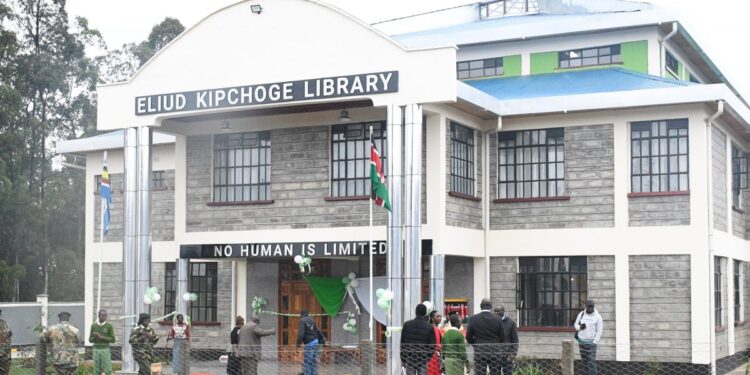 Magoha who was accompanied by marathoner Eliud Kipchoge, commissioned the facility Wednesday on behalf of President Uhuru Kenyatta.

The library is a gift by President Kenyatta in appreciation to Eliud Kipchoge after he broke the INEOS Challenge clocking1:59 in Vienna Austria on October 12, 2019.

Kipchoge was awarded Sh100 million by the President as a gift but he channeled the monies for the establishment of a library in his former school, Kapsisiywa.

“Eliud Kichoge Library whose construction works began one and half years ago is complete at a cost of Sh85million including a school gate, walkway and perimeter wall,” Magoha said.

The remaining Sh15 million will be used in the construction of 10 classrooms, an administration block and extension of the perimeter wall.

“The facility has books worth one million and 30 computers. Internet will be installed by the end of the week,” said the CS.

Nandi County Commissioner Herman Shambi said his administration shall offer security to the facility since they will treat it as a critical infrastructure in the area.

On his part, Kipchoge thanked all the stakeholders for making his wish a reality and said that the community will reap maximum benefits from the facility.

He added that he chose to set up a library so that it will impart knowledge to the community around, inspire students to work harder and change their mindset.

“I thank the Office of the County Commissioner, the President’s delivery unit, Board of Management, teachers and the community at large for ensuring that the facility is set up,” said Kipchoge.

“Education is key for development and it also spurs growth and development in different spheres of life. The library will be a useful research tool to the users,” stated Kipchoge.

Kipchoge later visited several schools in the county to commission CBC classrooms on behalf of the Education CS who had proceeded for other assignments among them at Kapsabet Boys and Girls schools.

Residents of Kapsisiywa hailed Kipchoge for converting his gift as service to humanity.

Meshack Kipchirchir, a resident, said the library will enhance literacy levels in the surrounding and the County at large.

“We thank Kipchoge for gifting us with the facility, it will be beneficial to all learners by promoting information and knowledge,” he said.

Let IEBC Be: Ruto tells of Raila Ahead of August Polls