by Linda Amiani
in Conservation, Environment
0 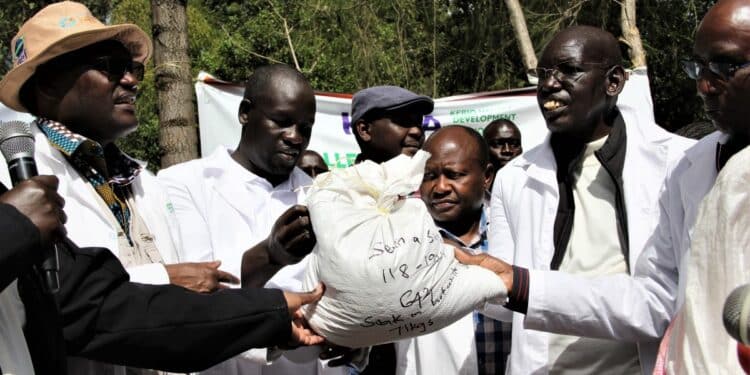 The Kenya Forestry Research Institute (KEFRI) will by the end of this year be able to store up to 300 metric tons of certified tree seeds that if successfully developed will translate to three billion tree seedlings.

This follows the government’s effort to strategically capacity build KEFRI to have more seed centres to store certified seed to be availed to stakeholders who partner with the government in the Kenya greening project.

The greening Kenya project is aimed at increasing the country’s forest cover from 7 percent to 10 percent of the land mass by 2030.

Environment and Forestry Principal Secretary Dr Chris Kiptoo said with the government’s investment, KEFRI is going to increase its seed centres to 18 nationally from the initial one centre that was based at Muguga.

“When the ministry came up with its strategy aimed at restoring and rehabilitating degraded areas of our landscape by planting trees in every available space in gazetted government forests, gazetted water towers, and wetlands as well as mangrove ecosystems and green spaces in towns, we had to up our game by supporting KEFRI increase its capacity in certified seed development and distribution,” said the PS.

Speaking during the distribution of certified tree seeds from KEFRI to the six regional development agencies at the KVDA tree nursery in Eldoret, the PS added that when they started implementing the strategy, KEFRI’s seed capacity was 10 metric tons annually which could develop 200 million seedlings per year from the one seed centre at Muguga.

The PS however said with the government’s intervention, KEFRI has increased its seed centres to six currently with a capacity of 80 metric tons.

“We have increased the seed capacity of KEFRI from 10metric tons to 80 metric tons in its stores currently. With 18 seed centres fully installed by the end of the year, KEFRI will have a storage capacity of 300 metric tons annually,” he added.

Dr. Kiptoo, who was accompanied by Principal Secretary State Department Regional Development and Northern Corridor Development, Dr. Belio Kipsang, also announced that his ministry will partner with various stakeholders from the private and public sector to raise two billion tree seedlings from the 80 metric tons of seed at KEFRI that will be distributed equally.

From the public sector, the PS added that they had identified 4,800 schools that they will partner with in the initiative. TVETS and other public institutions of higher learning have also been roped in, as well as the Ministry of EAC, Regional Development and Northern corridor, and the State Department for Correctional Services.

“We encourage the private sector, youth and women groups, as well as community forest associations (CFA’s) to have registered tree nurseries where we can buy seedlings from them,” said the PS.

On tree cover, the country is now way ahead of the constitutional requirement of at least 10 percent having attained an increase to 12.3 percent, said Dr. Kiptoo.

“We are however still quite low when we compare with the rest of the world, so we need to move and ensure that with the capacity we have installed through KEFRI, and if we can do 2 billion tree seedlings every year consistently we will be talking of a very improved situation by the year 2030,” he observed.

“As KVDA we are now in a position to produce up to 20 million tree seedlings from the current 2million annually from the 10 tree nurseries we have across the eight counties of Northern Kenya because of the boost of certified seed from KEFRI,” said Naporos.

The main challenge, he noted, was having readily available certified seeds, but with the boost, he was certain of increasing the production since there is an existing infrastructure, he added.