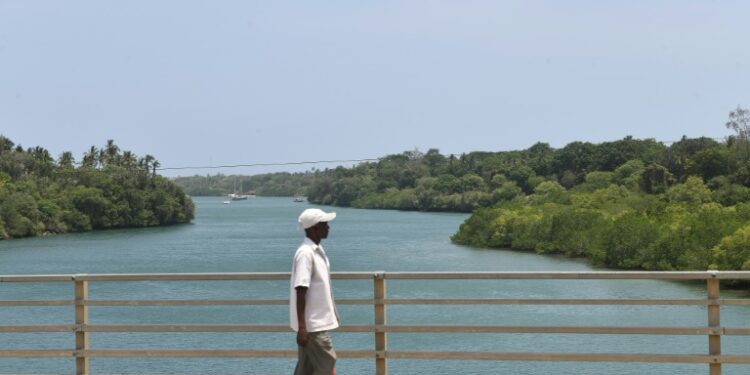 For years, sewage from Kenya's crowded Shimo la Tewa prison ended up in Mtwapa Creek, creating a bad smell and contaminating water that flowed out to the Indian Ocean | AFP

898
SHARES
5.7k
VIEWS
Share on FacebookShare on TwitterShare on WhatsApp

Heading north from Mombasa, the unmistakable whiff of a foul stench in the air was as reliable as any mile marker for motorists taking the highway along the Kenyan coast.

“You would always know you were near Shimo la Tewa Prison,” said Stephen Mwangi, a government scientist who has lived for decades in the coastal region where thousands of inmates are incarcerated in a maximum-security jail.

The smell wasn’t coming from the prison itself but its septic system, which had collapsed from overuse.

Every day, a small river of sewage flowed downhill into Mtwapa Creek, which empties into the Indian Ocean.

The contamination threatened fishing grounds, waterside hotels and restaurants, and the tropical reefs of Mombasa’s protected marine park, a jewel of the tourism industry just offshore.

Motorists pinched their noses as they passed over the creek but on the prison grounds, the stench was inescapable.

“Those who were living in the quarters were really affected by the smell,” said Erick Ochieng, deputy officer in charge of Shimo la Tewa Prison.

In an effort to solve the perennial menace, a low-cost “green tech” approach is being adopted to treat the wastewater.

An artificial wetland is being constructed on the prison grounds — a simple yet efficient system that mimics the way nature cleans pollutants from water using vegetation, soil and microbes.

Once fully operational — expected by end-April — sewage will first pass through an improved septic tank where solids are separated.

From there, the semi-treated water percolates through underground beds of sand and gravel, filtering out pathogens and other impurities.

The end result should be safe not only for the creek, but irrigating farms or fishponds around the prison, said Mwangi, a scientist with the Kenya Marine and Fisheries Research Institute, which is involved in the project.

Reeds planted on the surface of the wetland help with filtration and absorb nutrients from below, attracting birds and other wildlife, and beautifying a space few dared linger in the past.

“There will be no smell. We will actually have a very good environment,” said Mwangi.

The UN Environment Programme (UNEP), which sponsors the project, said artificial wetlands offered an affordable and versatile solution for sanitation, while storing carbon and helping cool the planet.

Champions of the technology say big cost savings are possible thanks to relatively inexpensive materials that filter the waste through simple gravity.

Traditional sewage systems require huge volumes of concrete to create retention ponds for the waste, and pumps and other electricity-gobbling machinery to treat it.

The prison complex houses as many as 6,000 people — convicts but also jail wardens, hospital staff and courthouse officials — and the project serves as a model for other built-up areas on waterways and beaches.

Home to 40 percent of the world’s population, coastal areas are among the most densely populated parts of the planet, UNEP says.

Creeks and inlets along the Kenyan coast self-clean by flushing out water with the ebbing and flowing of tides, said ecologist David Obura.

“The problem is now with just so many people, and so much pressure… that cleaning function has been overwhelmed,” said Obura, director of CORDIO East Africa, a Kenya-based oceans research institute.

“It’s not working anymore. And you can see it on the Kenyan coast.

Obura said it was too late for a major overhaul of sewage systems in crowded cities like Mombasa, but artificial wetlands were a “key tool” for policymakers trying to address the pollution crisis.

“We need to have locally-driven treatment using natural systems, and then I think we can really start to resolve some of these challenges.”

Somalia's next peacekeeping mission: will it change anything?

Final Voters Roll To Be Ready By June 9,Says IEBC