Grandson to the Late President Moi, Collins Kibet Toroitich kicked out of house over rent arrears, starts living in the streets 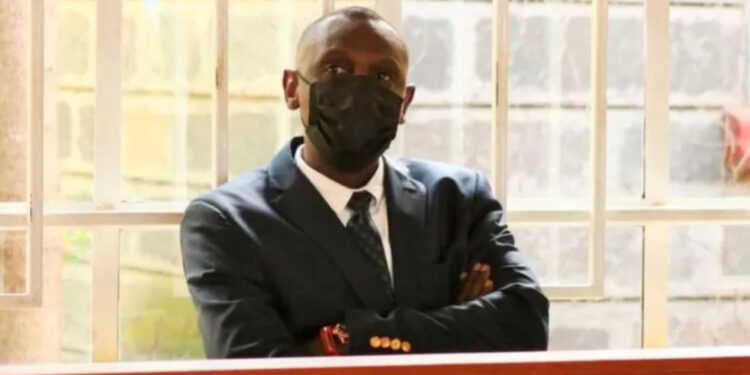 The late president Daniel Arap Moi’s grandson Collins Kibet Toroitich Moi has been evicted from his home over rent arrears amounting to KShs. 240,000.

Collins has told the High Court that following his eviction, he has now been forced to start living in the streets as he is unable to find work or money to fend for himself or his family.

Collins, who is aged 45, told the court that he has been living in a rental house whose cost is Sh. 40,000 per month.

However, he has not paid a dime over the last six months, which has led to the accumulation.

Collins is the son of the late Moi’ son Jonathan Kipkemboi Moi. He has been asking the court to allocate him his share of inheritance that belonged to his father.

Collins accuses his stepmother Sylvia Cherotich and stepbrother Clint Kiprono of failing to provide for him despite him being a dependant of the estate and a biological child of Jonathan.

Sylvia and Clint are the administrators of the estate.

He has told the court that Sylvia and Clint were not involved by the two when they applied to manage the estate and has asked the court to nullify the grant of representation to the duo.

“The deceased’s first house, where Collins comes from, is not being provided for and is not among the administrators. He was evicted from the house on Friday and is now on the streets. It is saddening considering the nature of the estate,” he has petitioned the court.

“The estate is actively being dealt with although the grant for letters of administration has not been confirmed. Funds are coming in (to the estate) and there is no accountability. He is the eldest son of the deceased.”

In related court documents, Collins says that his grandfather was worth over Sh. 300 billion.

He says that his grandfather’s wealth is spread across the world, including the United Kingdom, Australia and Malawi.

Collins has blamed lawyer Zehrabhanu Janmohamed who is the executrix and trustee of Moi’s will for the financial troubles he is currently facing.

He alleges that the lawyer has staged a plot to disinherit him.

A death certificate for the former late president showed that he succumbed to recurrent pneumonia.

Moi’s death was caused by asystole due to septic shock due to candid and klebsiella septicemia due to recurrent pneumonia, details contained in the death certificate show. Moi died on February 4, 2020, at the age of 95 years.

Three things we learned in the Premier League