by Walter Kinyua
in News, Religion
0 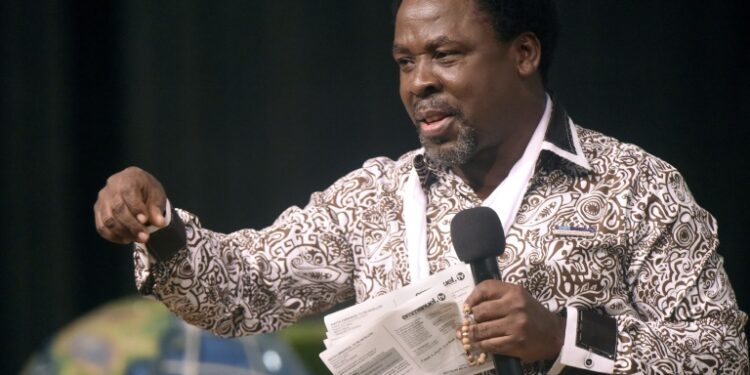 TB Joshua, known for his 'miracles' and 'resurrections', had an estimated fortune of several million dollars, according to Forbes | AFP

A popular but controversial Nigerian evangelical preacher, TB Joshua, has died, his church said Sunday on Facebook without disclosing the cause.

The 57-year-old founder of The Synagogue Church of All Nations, a Christian megachurch in Lagos, was one of Africa’s most influential preachers with millions of television and social media followers, but YouTube and Facebook took him to task over content deemed violent.

“God has taken His servant Prophet TB Joshua home… His last moments on earth were spent in the service of God,” the church wrote on its Facebook page, without giving further details.

One of the pastor’s lawyers, Olalekan Ojo, also confirmed his death.

“I confirm that the man of God, pastor TB Joshua, passed away on Saturday after his evening programme,” Ojo told AFP.

Temitope Balogun Joshua, often called “the man of God” or “the Prophet” known for his “miracles” and “resurrections”, had an estimated fortune of several million dollars, according to Forbes.

The round-faced man with a goatee and smart shirts was revered by many African politicians, sport stars and entertainment celebrities.

He also called himself a philanthropist and was widely known as a “televangelist”, with preaching’s live streamed on social media and on his popular TV station Emmanuel TV.

A statement from the presidency said Nigeria’s head of state, Muhammadu Buhari “commiserates with the family and members of The Synagogue Church of All Nations (SCOAN) on the passing of their father and founder”.

“The renowned televangelist will be missed by his followers all over the world not only for his spiritual contributions, but for touching many lives through philanthropic gestures,” presidential aide Femi Adesina said.

Allegations of hate speech
But TB Joshua’s life was not without controversy. He boasted of having cured people of AIDS and even bringing the dead back to life.

He also predicted that Covid-19 would end on March 27, 2020, later saying he meant the virus would be gone from Wuhan.

His website is full of testimonies about his apparent powers of prophecy.

“Mr Ubon Augustine is a living testimony that no disease can escape the healing power of Jesus Christ,” it reads. “He was healed of HIV/Aids through a prayer… Thank You Jesus!”

Videos of his “healings” were sometimes violent, with church members falling to the ground after being “cured”.

The pastor’s YouTube channel, which has more than 1.8 million subscribers and 600 million views, was shut down in April over allegations of hate speech against LGBT people.

In one of his videos, watched more than 1.5 million times, a woman is seen being hit violently to “cure” her of her sexuality.

Homosexuality is widely condemned in Africa’s most populous country, where “homosexual acts” can carry a 14-year prison sentence.

Facebook also removed several videos on Joshua’s page, which has more than 5.7 million followers, over his “cures”.

TB Joshua was also in the spotlight after 116 people died — 84 of them South Africans — when a six-storey guesthouse at his Lagos church complex collapsed in 2014.

An inquiry found extra floors had been added without planning permission, and engineers responsible for the construction are currently on trial for manslaughter.

Joshua was originally from Ondo state in southwestern Nigeria, but little else is known about his early life and background.