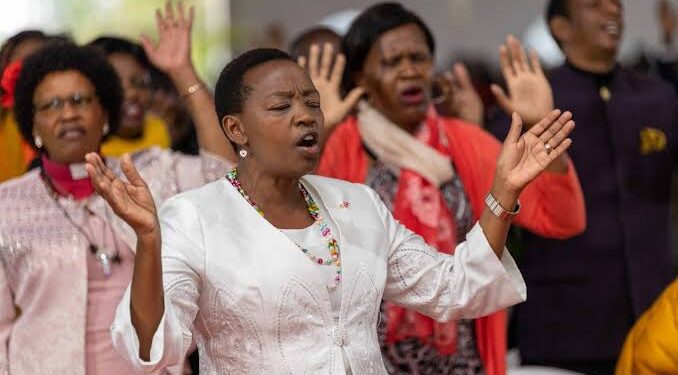 Rachel Ruto says she will be holding monthly church services at State House.

The first lady spoke on Sunday during a mass service held at the House on Hill.

“The Bible says ‘People will go up to Jerusalem, year after year, to celebrate the feast of the tabernacles’, and I think that this is a place where people will come year after year for Thanksgiving. I want to tell the church that this is not the last service we are having, you will be coming here month after month to give thanks to the Lord for doing us good,” she said.

She has also thanked the President for welcoming religious leaders to State House to pray for the country.

Known as one of the most prayerful women in the country, Rachel Ruto has more or less transformed State House into a house of prayer since replacing Margaret Kenyatta a few weeks ago.

“As an intercessor, I am very excited, I feel the doors have been opened. Thank you so much to our president for allowing us intercessors to walk into this compound today to pray, we are very excited.”

Besides, President Ruto had the church and religious leaders of his campaign period during his march to State House.

Among the religious leaders and groups that have paid a courtesy call on Rachel Ruto include Tanzanian music group Zabron Singers known for hits such as Mkono wa Bwana and Usiniache.

Manhunt for Bandits Who Killed 11 in Turkana