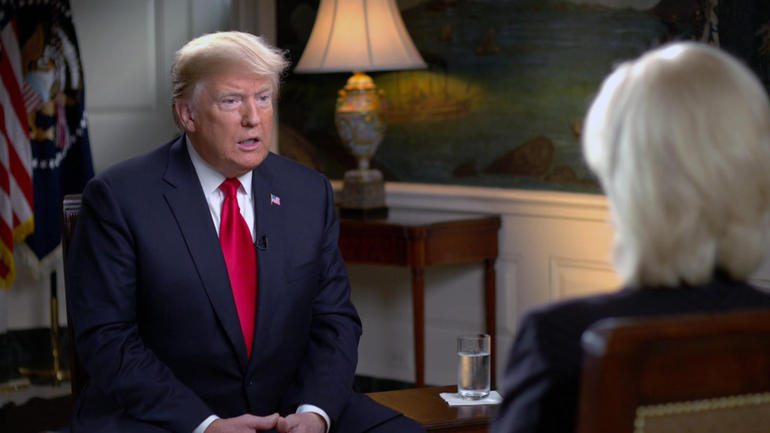 In an interview that’s made headlines this week, Lesley Stahl pressed President Trump on once-again rising coronavirus cases and what his priorities would be if re-elected.

Lesley Stahl told President Trump up front: “You know, this is ’60 Minutes.’ And we can’t put on things we can’t verify.”

On Sunday night, the show remained true to its word.

Now that the official 60 Minutes interview has aired on CBS tonight, it’s turned out to be every bit as embarrassing for Donald Trump as it was expected it would be.

While interviewer Lesley Stahl did a solid job, her questions weren’t all that tough, and it certainly shouldn’t have been enough to fluster him. If the President of the United States couldn’t handle these questions about his record and his own past statements, then he certainly can’t handle tough decisions or foreign leaders.

Donald Trump Whining, and Walking Out

But there was Donald Trump, whining and whining (and whining) about how tough and unfair the questions were, only to get up and walk out after his own people told him there were still five minutes to go.

Trump can’t take the heat. He can’t handle the pressure. And now everyone who watched 60 Minutes tonight got to see just how weak and fragile he is.

The interview was conducted as part of a “60 Minutes” election-year tradition: interviewing the Republican and Democratic contenders for the office of President and Vice-President. Indeed, part of Sunday’s “60 Minutes” broadcast is devoted to an exchange between Norah O’Donnell and Joe Biden and Kamala Harris.

The program used Stahl’s in-conversation responses, narration, and clips of Trump from rallies to vet his statements. “We had prepared to talk about the many issues and questions facing the President, but in what has become an all-too-public dust-up, the conversation was cut short,” says Stahl, in narration that accompanies the piece. “It began politely, but ended regrettably, contentiously.”

In the segment, Stahl also sheds light on pictures released earlier his week of White House Press Secretary Kayleigh McEnany handing her a giant tome, which is said to contain the plan President Trump wants to use to replace Obamacare. “It was heavy, filled with executive orders, congressional initiatives,” Stahl tells viewers. “But no comprehensive health plan.”

Biden and Harris Sit For The Full Interview

Biden and Harris, meanwhile, responded to tough questions from O’Donnell without much complaint, though they did deflect on occasion.

During the course of that interview, O’Donnell asks Biden and Harris about whether Harris can support Biden initiatives with which she previously disagreed; Biden’s mental acuity; their view of the U.S. court system; and Biden’s view on funding for police.

Biden and Harris never insult the interviewer or tell her they’ve had enough of her questions.