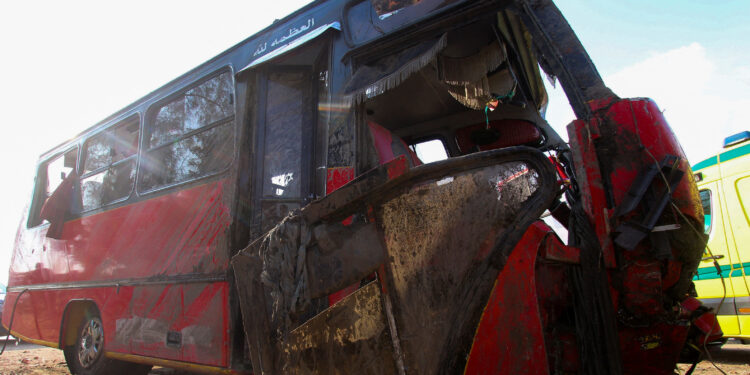 A view of the accident site where a minibus fell into a canal in northern Egypt, according to the Health Ministry in Dakahlia Egypt November 12, 2022. REUTERS/Stringer

Twenty people were killed today when the minibus they were travelling in toppled into a canal in northern Egypt’s Nile Delta.

Eight of the 35 passengers were injured in the accident, including the driver.

The driver was arrested, after a preliminary report after a drug test by the police stated he was allegedly under the influence of narcotics.

They said he was also suspected of using a mobile phone at the wheel at the time of accident.

Emergency crews recovered the heavily damaged minibus from the canal.

Traffic accidents are common in Egypt where roads are often poorly maintained and driving rules flouted.

In 2021, around 7,000 people were killed on the roads of the Arab world’s most populous country, according to official figures.

In July 25 people died and 35 were injured in central Egypt when a bus crashed into a truck parked on the side of the road.

Abortion under Spotlight in Conservative Morocco

43% Increase in Tesla Deliveries in the Third Quarter

Kivutha: Kamba Community Will Lose Should Kalonzo Vie For Presidency

Climate Crisis: The World is Staring at a Catastrophe, Experts Warn