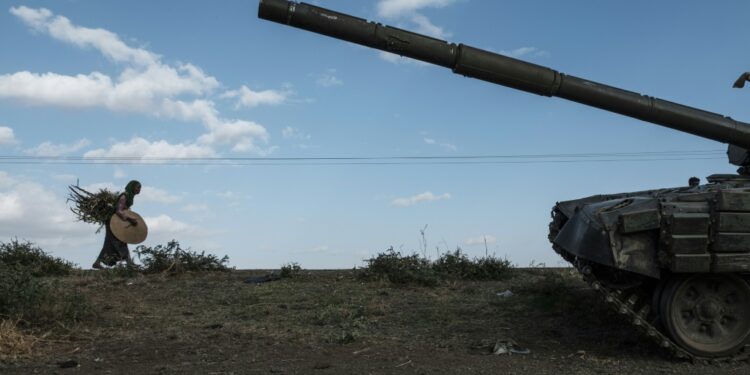 The Ethiopian government and Tigrayan rebels reached a peace deal on November 2: IMAGE/AFP

Ethiopian government said Friday that 70 percent of the war-stricken northern region of Tigray was now under federal army control.

“Aid is flowing like no other times,” he said, adding that trucks of food and medicine had been sent to the strategic city of Shire.

AFP was not able to independently verify the claims, which come after the government and the rebel Tigray People’s Liberation Front (TPLF) reached a deal on November 2 aimed at ending their brutal two-year conflict.

Access to northern Ethiopia remains severely restricted and Tigray, which has a population of about six million people, is still inaccessible to journalists.

The northernmost region is in the grip of a severe humanitarian crisis due to lack of food and medicine, and there is limited access to basic services including electricity, banking and communications.

The breakthrough peace deal was signed in the South African capital Pretoria after little more than a week of negotiations brokered by the African Union between the federal government and TPLF delegations.

It notably calls for the cessation of hostilities, restoration of humanitarian aid, the re-establishment of federal authority over Tigray and the disarming of TPLF fighters.

The World Health Organization on Wednesday called for a massive influx of food and medicines into Tigray following the ceasefire deal, saying desperately-needed aid had not yet been allowed in.

“Even in the middle of fighting, civilians need food, need medicine. It cannot be a condition.”

Talks have been under way in the Kenyan capital Nairobi this week between representatives of the warring sides to follow up on the Pretoria deal.

The meetings were due to discuss the disarmament of the rebels, while the AU said they should also provide a “roadmap” for immediate humanitarian access and restoration of services” in Tigray.

The conflict between the TPLF and pro-Abiy forces, which include regional militias and the Eritrean army, has caused an untold number of deaths, forced more than two million from their homes and sparked reports of horrific abuses by all parties.

Estimates of casualties vary widely, with the United States saying that as many as half a million people have died, while the EU’s foreign envoy Josep Borrell said that more than 100,000 people may have been killed.

UN investigators have accused Addis Ababa of possible crimes against humanity in Tigray and of using starvation as a weapon of war — claims denied by the Ethiopian authorities.

Abiy — a Nobel Peace Prize laureate — sent troops into Tigray on November 4, 2020 to topple the TPLF, the region’s ruling party, in response to what he said were attacks by the group on federal army camps.

Justina Syokau Cries for Rayvanny's Love, Promises to Give Him Five Kids

India’s Covid death toll past 200,000 as it suffers worst day of pandemic with record number of cases and deaths