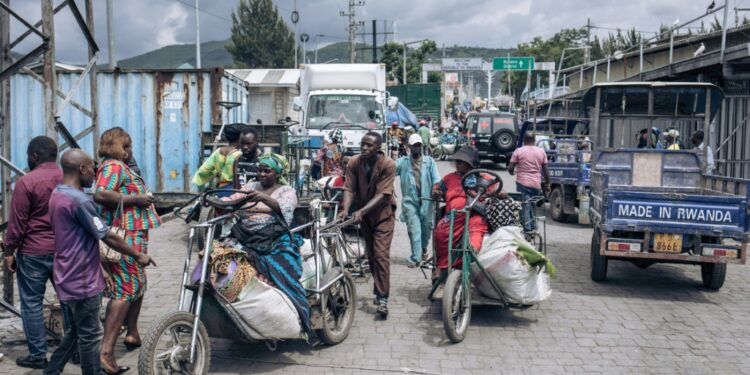 A man wearing a Congolese military uniform was killed by Rwandan troops early Saturday after he crossed the volatile border and started firing at local forces, the Rwandan military said.

The incident occurred at about 1 am (2300 GMT Friday), the Rwanda Defence Force said, amid heightened tensions between Kigali and Kinshasa over the conflict in the east of the Democratic Republic of Congo.

The RDF said on Twitter that “an unidentified soldier believed to be from the FARDC (DR Congo armed forces)” crossed the border “and started shooting at Rwanda Defence Force guard towers”.

“He was shot dead by RDF patrol before causing any casualties,” it added.

The shooting took place on the Rwandan side of the so-called “Petite Barriere” border post, one of two linking the main eastern DRC city of Goma and Gisenyi in Rwanda.

Relations between the two neighbours are strained over Kinshasa’s charges that Kigali backs the M23 rebel group, which has been capturing swathes of territory in the eastern DRC in fighting that has sent thousands of people fleeing.

The border area was calm on Saturday after the shooting incident and people were continuing to go about their daily lives.

AFP journalists saw a team from the Expanded Joint Verification Mechanism, a body which monitors the Great Lakes area and investigates security incidents, in no-man’s land between Rwanda and DRC.

Congolese officials said the identity of the dead man was not known, but that no Congolese soldier on duty in the area had been reported missing.

“There was a lot of gunfire during the night,” said one local resident, Grace Mbala. “We were scared, we thought it was the M23 coming back.”

On Friday, Kenya’s former president Uhuru Kenyatta — who is mediating in the conflict — said Rwandan President Paul Kagame had agreed to help push for the M23 to cease fire and withdraw from captured territory.

The main frontline lies about 20 kilometres (12 miles) from Goma, while fighting is also under way near the Ugandan border and in Masisi to the west of the city.

Sakaja Says He Won’t Shut Down Churches Over Noise Pollution