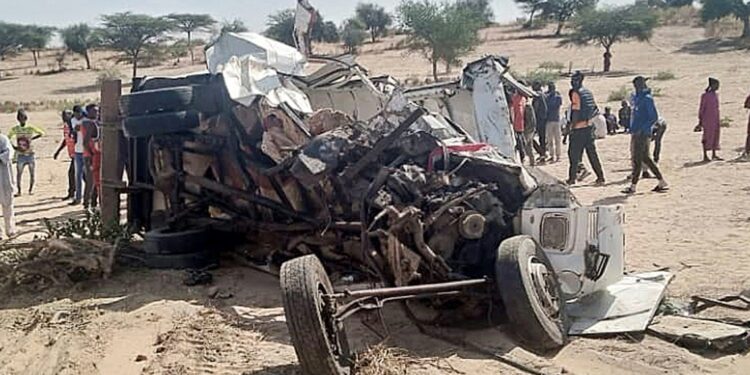 Twenty-two people died in the collision in northern Senegal: IMAGE/AFP

Twenty-two people died on Monday when a bus and a truck collided in northern Senegal, firefighters said, a week after a smash between two buses left 40 dead.

Over 20 people were injured in the latest accident, which occurred near Sakal in the Louga region, Papa Ange Michel Diatta, a colonel with the national firefighting service, told AFP.

The bus had a 32-seat capacity but was carrying 47, Ba told reporters, saying failure to follow the rules increased the casualty numbers.

In a tweet, President Macky Sall said, “Another deadly accident on our roads….”

The toll “highlights the need to strengthen highway safety measures,” he added.

Senegal was plunged into three days of mourning after two buses collided in the early morning of January 8 in the central region of Kaffrine, leaving 40 dead and more than 100 injured.

The government responded by announcing nearly two dozen measures, including limiting buses and trucks to 90 kilometres per hour (56 mph), banning night buses and outlawing the import of used tyres — the suspected cause of the accident.

But bus companies are fighting back, securing a one-year delay in a proposed ban on placing luggage on roof racks to prevent vehicles from becoming imbalanced.

A witness interviewed by RFM radio said that in Monday’s crash, the bus driver had tried to dodge a donkey wandering on the road.

Buses carry not only passengers but also goods in Senegal and are often fitted out to take a far bigger load than authorised.

According to the World Bank, Senegal, a country of 17 million, records 24 road deaths for every 100,000 inhabitants annually.

By comparison, the toll is six per 100,000 across the European Union and two in Switzerland, while the average in sub-Saharan Africa is 27.