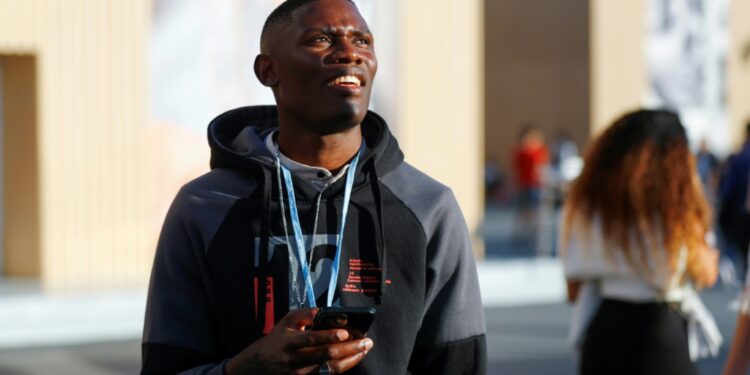 Ugandan youth activist Nyombi Morris arrived in Egypt for the UN’s COP27 climate summit with high hopes of being part of the campaign for environmental justice.

But it didn’t take long for Egypt’s stiff security measures to shatter his dreams, as rights groups warn the North African country has stifled protests with “dozens” of arrests.

“I was so happy when they announced that COP would be in Africa,” said Morris, who founded the Earth Volunteers youth organisation campaigning for “climate justice”.

“I thought maybe I would get a chance to be at the room where the negotiations are taking place.”

Instead, “with the questions we received at the airport, it will not be easy for us to continue with our plan”, the 24-year-old said.

In 2008, when Morris was 10, devastating flash floods hit Uganda’s eastern Butaleja district — an area where the illegal extraction of riverbank sand for construction was common. Some 400 people, including Morris’s family, lost their homes.

Morris, who has said the digging “exacerbated flooding already made worse by climate change”, said they had to move to the capital Kampala.

Activists wanting to demonstrate at COP27, held in the Egyptian resort town of Sharm el-Sheikh, must request accreditation 36 hours in advance, providing information such as the names of the protest organisers and details of the proposed march.

Approved demonstrations are only allowed during working hours, and in a specific purpose-built area.

“When they started asking about our locations, where we will be staying, our passports, our names, we were worried,” he said.

“What if they follow one of us and (we) get arrested?”

He cited the case of Indian climate activist Ajit Rajagopal, who was arrested after setting off to march from Cairo to Sharm el-Sheikh. He was later released after an international outcry.

Human Rights Watch on Sunday warned that “dozens of people” calling for protests had been detained.

“Egypt’s government has no intention of easing its abusive security measures and allowing for free speech and assembly,” the watchdog said.

Rights groups say at least 138 people have been arrested ahead of a rally slated for November 11 — planned nationwide but not in Sharm el-Sheikh — against what they decry as repression and sharp increases in the cost of living.

Africa is home to some of the countries least responsible for planet-heating emissions but hardest hit by an onslaught of weather extremes.

On top of security restrictions, Morris lamented that activists like him were excluded from the talks.

“I am watching online because our ‘observers’ badges don’t allow us to enter,” he said.

He said his hopes have faded that having the summit in Africa might make a difference — including in demanding wealthy nations responsible for emissions pay their dues.

“It is not an African COP, it is a polluters’ COP — because it is polluters dominating,” he said.

“Haven’t you seen Coca-Cola here?” he added, referring to one of this year’s official sponsors.

Campaign group Greenpeace has called Egypt’s choice of the soft drink giant “appalling”, blaming the company for much of the “plastic pollution in the world”.

Last year, at the COP26 in Glasgow, tens of thousands of demonstrators from all over the world marched to demand “climate justice”.

Swedish climate activist Greta Thunberg is skipping COP27, slamming it as a forum for “greenwashing” and saying the “space for civil society this year is extremely limited”.

On Sunday, ignoring the restrictions, a handful of activists waved banners at the entrance to the summit hall.

“We are trying to promote the veganism to help save the planet from the greenhouse gases”, said Tom Modgmah, a follower of Vietnamese “Supreme Master Ching Hai”, alongside colleagues waving banners.

“Be vegan, make peace,” they read.

Kenya’s history of election violence is threatening to repeat itself