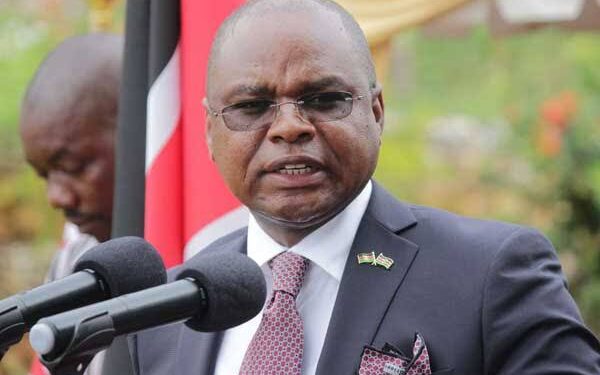 Former Kilifi Governor Amason Kingi under the Kenya Kwanza Coalition has been elected as the new senate speaker.

The senate speaker election happened on Thursday, 8, after the elected and nominated Senators were sworn in.

Kingi won the seat with a majority of 46 out of the 67 total votes.

The former gubernatorial candidate Mombasa County, Hassan Omar yesterday stepped down from the race in favor of Kingi, where he requested other senators affiliated with Kenya Kwanza to support him.

“I have no objection to this considering that this position was reserved for the Coast and hereby withdraw my candidature for Senate Speaker. I trust that all senators will rally their support for my brother Kingi as the sole Kenya Kwanza Candidate as so agreed upon by all of us” said Omar in his Facebook post.

Also read: Hassan Omar Drops out of the Senate Speaker Race in Support of Kingi

His win was almost inevitable after Wiper party leader Kalonzo Musyoka withdrew from the race earlier today. The outgoing president had yesterday endorsed Kalonzo as the perfect candidate for the seat during Azimio la Umoja’s parliamentary meeting in Maasai Lodge, Rongai.

Kingi went ahead to give an acceptance speech where he thanked the member for electing him and promised to work rightfully as expected by the constitution.

“I am profoundly honored and overwhelmed by the great honor and privilege you have bestowed upon me by electing me as your Speaker. I am touched by the immense confidence and trust you have placed in me.

“I therefore accept with humility and pledge that I shall perform to my utmost ability the constitutional responsibilities and duties of the office of the Senate Speaker for the next five years with diligence and decorum,” He said.

Kingi is to replace Kenneth Lusaka.

Why Azimio Senators Walked Out Of Senate Sitting

Orengo Confident That Supreme Court Rulling Will Be Fair