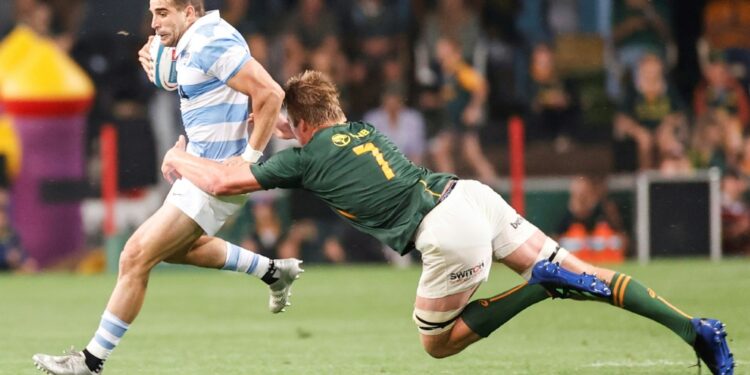 Argentina coach Michael Cheika has slammed Australian referee Damon Murphy after four of his players were yellow-carded and they conceded twenty-two penalties in a weekend loss to South Africa.

Two penalty tries were also awarded against the South Americans when they attempted to stop driving mauls by the reigning world champions during the second half.

The Springboks beat the Pumas 38-21 on Saturday in a scrappy, penalty-riddled final round Rugby Championship match at Kings Park in Durban.

Cheika hinted last weekend that he was unhappy with the refereeing of New Zealander James Doleman in a 36-20 home loss to South Africa but stopped short of criticizing him publicly.

“I promised my mother not to talk about referees anymore and I cannot lie to my mother,” the Australian told reporters in Buenos Aires.

Cheika broke his silence about officiating, though, after his side suffered a third straight loss in the southern hemisphere championship after winning two of the first three matches.

“After the first three rounds of the Rugby Championship, we were the least penalized team. It is not clear to us what we are suddenly doing wrong.

“It is very difficult to win games when decisions are made like this,” he said, referring to the 17-point defeat in Durban.

“At one point the referee told our captain (Julian Montoya) he has empathy for him. We do not need empathy, we need respect.”

Reflecting on the Championship campaign, which included a stunning first victory for Argentina in New Zealand, Cheika said they should have won at least two more matches

“We could have beaten Australia twice at home, instead of once, and after coming within two points of South Africa in Buenos Aires, we should have gone on to win.

“I also do not think the score in Durban was a true reflection of that match.

“The lesson we take from our latest game is that it is very important to make good decisions at key moments.”

Cheika said Argentina are improving but must develop a winning mentality ahead of the 2023 Rugby World Cup in France, where they will play England, Samoa, Chile, and Japan in Pool D.

“Argentina are good enough to win more Tests than we do. We must get rid of this notion that just competing is sufficient. We must win regularly.

“We have learnt many lessons from this Rugby Championship and must take them into our November tour of Europe.”

Argentina is scheduled to play England at Twickenham on November 6, Wales at the Principality Stadium six days later and Scotland at Murray field on November 19.