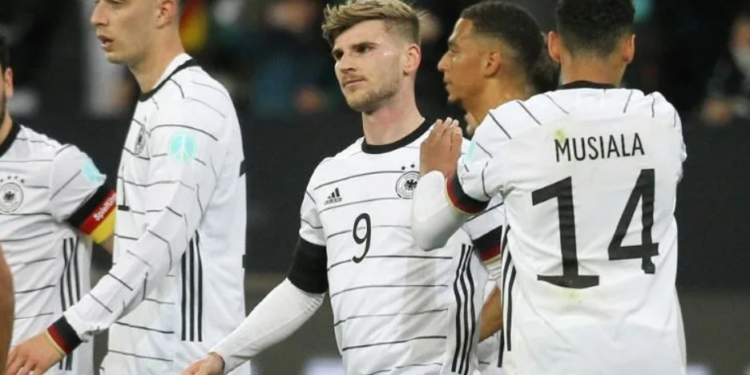 Chelsea pair Kai Havertz and Timo Werner both hit the net Saturday as Germany eased past Israel with a routine 2-0 friendly win in Sinsheim.

“On the whole, it was a good performance from us for the first game of the new year,” Werner told broadcaster ZDF.

Germany centre-back Nico Schlotterbeck said the hosts had defended well, but “in the last quarter of an hour, we gave away too many balls”.

“I think it’s great how the team earned it’s own rewards – we have now scored six goals from set pieces in eight games.”

With 19-year-old Bayern Munich star Jamal Musiala in the attacking midfield role, an experimental German side had few problems taking a 2-0 lead at half-time.

Three days before the Germans play the Netherlands in their next friendly in Amsterdam, the hosts dominated the first half, but sat back after the break.

Both goals came from dead-ball situations. Havertz made amends after squandering an earlier chance by finally breaking the deadlock with a header from a corner.

Werner then produced a superb finish to steer a free kick just inside the near post just before the half-time whistle.

He has now scored six goals in his last six appearances for Germany.

Israel, who failed to qualify for the World Cup, rarely ventured into the German half.

Flick tinkered with his line up for the second half, Kevin Trapp replacing Barcelona goalkeeper Marc-Andre ter Stegen between the posts.

Mueller took over the captain’s armband from Ilkay Gundogan and slotted into the attacking midfield role with Musiala dropping back.

Mainz midfielder Anton Stach, part of the German Under-21 side which won the European title last year, made his senior debut.

Germany midfielder Julian Draxler had a golden chance in the second half.

The Paris Saint-Germain midfielder made his first international appearance for 17 months and was only denied by a diving save from Israel goalkeeper Ofir Marciano.

At the other end, Trapp pulled off a superb diving save when Cohen tried to drill in his penalty attempt in stoppage time.