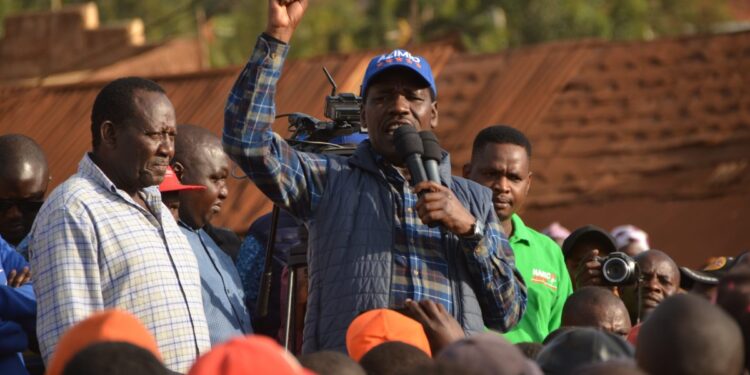 Agriculture Cabinet Secretary Peter Munya has vowed to make a follow-up audit of millers contracted by government to ensure that subsidised maize flour was available all over the country.

Speaking at Muthara market in Meru County Wednesday, Munya blamed millers for intentionally hoarding the commodity despite the government having paid them subsidies to lower the prices.

“The main problem we are facing at the moment is that some of the unscrupulous millers are hoarding the cheap maize flour so that they can sell it at a higher price after the subsidy is over,” said Mr. Munya.

He however said that the government will not tolerate this and was making follow-ups to identify the millers who were not supplying the maize flour as per the directions.

“We will not be soft on such millers since they are stealing from the common Mwananchi’s taxes,” the CS said.

He said the government has also dispatched teams across the country to monitor the situation and added the teams are sending daily updates on the progress of the programme adding that Kenyans were also free to give any report on the same.

“The government has initiated talks with countries in the COMESA region having bumper maize harvests to access cheap maize for the local market which will also be supplied to millers at subsidised prices so they can lower the price of Unga,” said Mr. Munya.

He said that dealers are already buying maize from these countries but added there is no guarantee of adequate quantities when one does so individually and hence the reason the government has come on board to negotiate with these countries to get a quota allocation that will satisfy our Kenyan market.

The CS assured Kenyans that they have engaged enough millers to supply the subsidised maize flour at the recommended price of Sh100 and below.

“A total of 129 millers, both large and medium scale have been enlisted to participate in the programme for an initial four weeks, effective 22nd July 2022,” said Mr. Munya.

“We are aware that some of the millers have since commenced milling and servicing the markets with the subsidised sifted maize flour to ensure that the Mwananchi gets the Unga at the desired price,” Munya said.