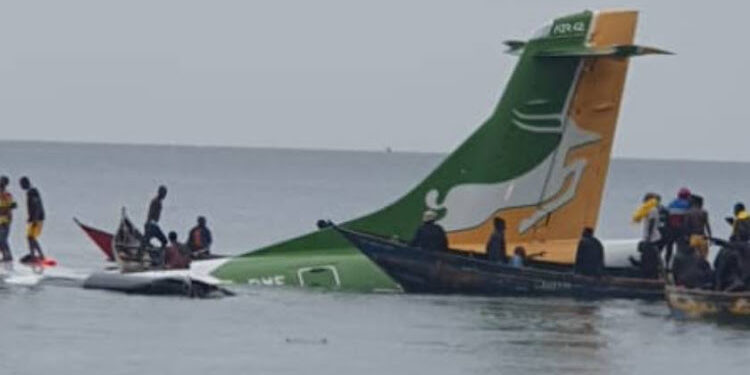 26 passengers have currently been rescued from a Precision Air flight that plunged into Lake Victoria, Tanzania on Sunday Morning.

According to a report by Precision airline, the passengers of flight no PW 494 were flying from Dar es Salaam to Bukoba, when the plane crash landed into Lake Victoria.

Also Read: Search for Survivors after Plane Plunges into Lake Victoria in Tanzania

On board the flight there were thirty-nine passengers on board, including thirty-eight adults and one infant.

The Prime minister, Kassim Majaliwa said the death toll had increased to nineteen.

“All Tanzanians are with you in mourning the 19 people who lost lives during this accident,” Majaliwa told a crowd after arriving at Bukoba airport.

The airline dispatched rescuers on Sunday, where they pulled twenty-six survivors to safety,

“An investigation team consisting of Precision Air technical staff and TAA (Tanzania Airports Authority) has also departed to join the rescue team on the ground,” “Precision Air sincerely understands the anxiety for confirmed information and will therefore do its best to issue more details,” the company said.

“The next update will be issued as soon as we receive more information from the accident scene.” the airline said in a statement yesterday.

President Samia Suluhu Hassan expressed her condolences to those affected by the accident.

“Let’s continue to be calm while the rescue operation continues as we pray to God to help us,” she said on Twitter.

Impact of Russia-Ukraine Crisis in Africa

Maize Flour Prices to Only Reduce by Ksh 2.7 After Pause on Levies