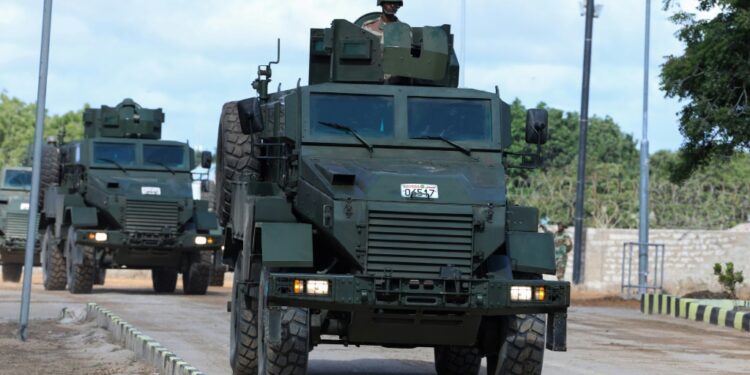 Somalia's armed forces together with local clan militias have been waging an offensive against Al-Shabaab since the middle of last year: IMAGE/AFP

Somalia’s armed forces on Monday captured a strategic coastal town that Al-Shabaab jihadists had held for more than a decade, top officials said.

Government forces, which have been waging a major offensive against the Al-Qaeda-linked group for months, took control of Haradhere in central Galmudug state after the militants fled without putting up a fight, they said.

“It is a historic victory,” Prime Minister Hamza Abdi Barre said in a statement. “The brave members of the national armed forces… have destroyed the enemy of the nation and liberated the strategic port town of Haradhere.”

Deputy telecommunications minister Hussein Ahmed, one of several senior officials embedded with the troops that advanced on Haradhere, told AFP the port had been a key supply route for Al-Shabaab for both people and goods.

“It is very important that after a long time this strategic and historic district is now returned under the control of the government,” he added.

Al-Shabaab had seized the town, which lies  500 kilometres (300 miles) northeast of the capital Mogadishu, in 2010 after dislodging local militias and pirates.

In recent months, the army and local clan militias have retaken chunks of territory in Galmudug and Hirshabelle states in an operation backed by US air strikes and an African Union force.

“2023 is the year of freedom and the eradication of Al-Shabaab, and our whole country will be liberated from the desperate kharijites (renegades),” Barre said in a statement, using a government term for Al-Shabaab.

Army sources said the village of Galcad, also in Galmudug state, was similarly recaptured on Monday after the Islamist fighters fled without a fight.

Al-Shabaab has been waging a bloody insurgency against the weak internationally-backed central government for about 15 years, carrying out attacks both in Somalia and neighbouring countries which sent troops to help in the fight against the militants.

Although forced out of Mogadishu and other main urban centres more than a decade ago, Al-Shabaab remains entrenched in parts of rural central and southern Somalia.

President Hassan Sheikh Mohamud had declared “all-out war” on the jihadists after taking office in May last year.

At an anti-Al-Shabaab rally last Thursday, Mohamud urged residents to rise up against the Islamist militants, likening them to “bedbugs”.

But they have frequently retaliated against the offensive with bloody attacks in the capital and elsewhere in the troubled Horn of Africa nation, which is also grappling with a punishing drought.

In the latest strike by the militants, eight people were killed on Saturday by a roadside bombing in the Hiran region, Hirshabelle state.

On January 4, 19 people were killed in twin car bombs in Mahas, also in the Hiran region.

In the deadliest attack in five years, 121 people in the capital Mogadishu were killed in two car bomb explosions at the education ministry in October.

Shortages Causing Fury Among Nigerians Ahead of Elections