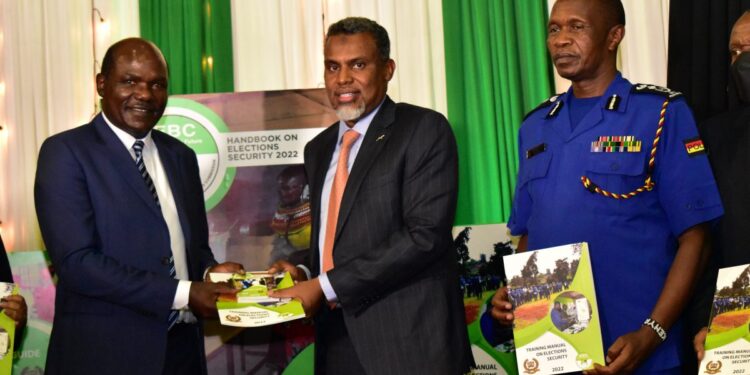 The Independent Electoral and Boundaries Commission (IEBC) in conjunction with election security stakeholders have jointly launched an Election Security Arrangement Programme (ESAP) that will ensure a free, fair and credible general election, 2022.

Speaking during the event, the Director of Public Prosecutions (DPP) Prof Noordin Haji stated that the launch of the ESAP manual is aimed at enhancing the collaboration of the IEBC and other stakeholders such as The National Cohesion and Integration Commission (NCIC), Nation Police Service (NPS), Justice and Legal Affairs Committee (JLAC), Office of Public Prosecutions among others.

“The partnership is aimed at facilitating a coordinated election security plan in the forthcoming elections to ensure that the election is free, fair and secure for all,” said Haji.

He further pointed out that the country is at a season where electoral campaigns are getting intense which has seen a rise in threats, violence and cybercrimes.

“It is in such times that the political arena is getting heated and we as the justice sector get to act with vigilance through the ESAP process which keeps us engaged in order to have a peaceful general election,” said the DPP.

Haji assured Kenyans that the IEBC, through the ESAP has deployed a strong tactic that will help the commission to effectively discharge its mandate and mitigate any eventualities that could be detrimental to the electoral process.

“The manual will enhance our vigilance and effectiveness and prevent any security breaches and irregularities during the elections,” he affirmed.

The IEBC Chairman Wafula Chebukati said the commission undertook a continuous voter’s registration and right now there are about 22 million registered voters.

He said after IEBC is done with the register, it will be handed over to the auditors to audit then verification of voters’ register shall take place.

“Come August 9, there shall be 50,000 polling stations and 500,000 personnel including the police officers whereby every polling station shall have two police officers,” said Chebukati adding that IEBC shall work closely with the office of the Director of Prosecutions, Police and other stakeholders for a free, fair and peaceful election.

Chebukati warned that there is no vacuum in the law and warned that the law will catch up with those uttering hate speech during the election campaigns.

In his remarks on behalf of the Inspector General of Police Hillary Mutyambai, his deputy Edward Mbugua stated that the ESAP manual will be guiding the election security management during the elections.

He reiterated that ESAP manual is being used by the police to build capacity of all security personnel so that elections are carried out in a professional and consistent manner.

“I would like to assure Kenyans that National Police Service will work hand in hand with the IEBC to ensure that the 2022 general election will be peaceful, free and fair for all and not a replica of the 2007 post-election violence,” Mbugua assured Kenyans.

Savula Says He Was Forced To Join Azimio