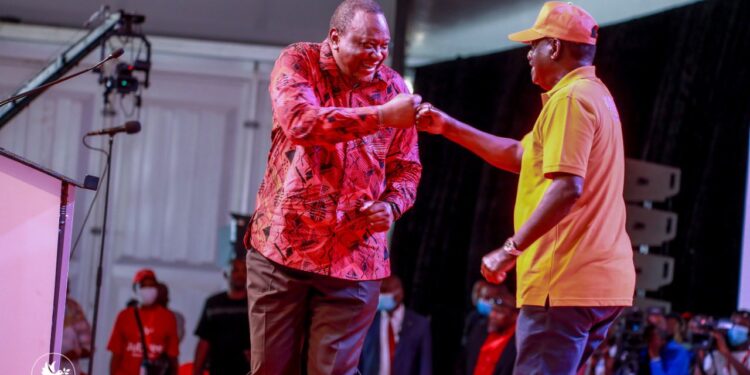 Former First Lady Mama Ngina Kenyatta has broken her silence in the succession politics, saying she stands by the choice of her son President Uhuru Kenyatta.

Speaking publicly for the first time over the criticism of his son, President Uhuru Kenyatta, on succession politics and his style of leadership, the former First Lady said “the president means well for Kenya.”

“Depending on how one is raised up in his or her home even when they come out in public they cannot go out insulting others. I want to tell those who are engaging in insults that we will leave them like that if at all they were taught insults while growing up,” the former First Lady said during a burial of her cousin in Gatundu.

She said engaging in insults publicly is all about poor upbringing.

Mama Ngina defended his son’s decision to support Orange Democratic Movement (ODM) leader Raila Odinga to succeed him once he exits office at the end of his second and final term in August saying, “the president means well for Kenya.”

Uhuru has come under heavy criticism, particularly from his Deputy William Ruto and leaders loyal to him, who accuse the president of taking an active role in deciding his successor.

“Let’s try to love each other, this country is ours and we should strive to move it forward. Your leader cannot show you the wrong path,” she said in reference to the president.

In an apparent reference to Ruto, Mama Ngina stated that President Kenyatta was not to blame for the fallout between the two.

“He (President Uhuru Kenyatta) had no ill will but if your junior shows you disrespect, you don’t bother, you just continue moving forward. The direction which he is showing you, follow it,” she urged Kenyans.

Ruto and Kenyatta fell out in March 2018 when the president shook hands with Odinga, effectively ending their political differences and have stuck together since culminating to the formation of the Azimio La Umoja movement that brings together more than 30 political parties that support Odinga’s candidature in the August election.

Kenyatta is categorical that “Raila is the 5th president of Kenya” and has dismissed Ruto’s bid, saying he is “dangerous for the country.”

While Ruto appears unhappy that Kenyatta is not keeping his word to support him, the president blames him for launching scathing attacks on him and the government for the past four years.

"Gubernatorial Aspirants With Integrity Issues Should Step Aside" Ann Kananu