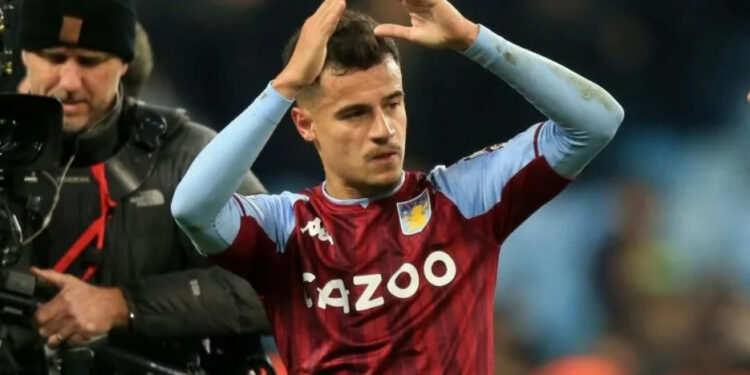 Philippe Coutinho admitted he was happy to be back in the Premier League after the Aston Villa forward marked his debut with a late equalizer in Saturday’s 2-2 draw against Manchester United.

Steven Gerrard’s side were trailing by two goals in the closing stages at Villa Park before Coutinho worked his magic just days after arriving on loan from Barcelona.

Stepping off the bench in the 68th minute, Coutinho set up Jacob Ramsey’s 77th minute goal with a deft pass.

Five minutes later, the Brazilian latched onto Ramsey’s low cross with a cool finish from close-range to cap Villa’s fightback.

It was the perfect way for Coutinho to celebrate a welcome return to the English top-flight four years after leaving Liverpool to join Barca.

“I missed these games and the Premier League. I’m very happy to be here with my new teammates,” Coutinho told Sky Sports.

“It was a good start, we kept believing until the end, but we didn’t lose.”

Asked if he was nervous before making his Villa debut, Coutinho said: “Yes, a little bit, I don’t speak English very well, I prefer to be on the pitch than talking all the time.

“I’m happy, it was the first game and I want to work hard to improve and be in better shape.”

Coutinho has endured a difficult time at Barca and spent 2019-20 season on loan at Bayern Munich.

Villa boss Gerrard played with Coutinho at Liverpool and is convinced he can reignite the Brazil star’s career.

Coutinho was among the world’s best players when he left Liverpool, but he does not want to dwell on the reasons for his slump in Spain.

“There have been many ups and downs. It is in the past,” Coutinho said.

“I’m here and I’m focused on the objectives of the club and the manager, and I want to do a good job to help my teammates and the club.”