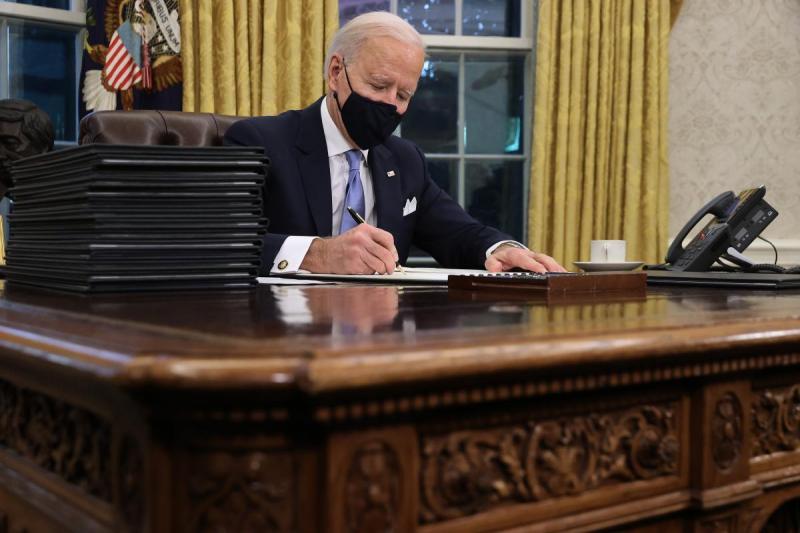 In 17 Executive Orders, proclamations and memorandums, signed hours after his inauguration, Biden moved swiftly on Wednesday to dismantle Trump administration policies his aides said have caused the “greatest damage” to the nation.

Despite an inaugural address that called for unity and compromise, Mr. Biden’s first actions as president are sharply aimed at sweeping aside former President Donald J. Trump’s pandemic response, reversing his environmental agenda, tearing down his anti-immigration policies, bolstering the teetering economic recovery and restoring federal efforts to promote diversity.

He also signed a memorandum directing the Secretary of Homeland Security to take actions aimed at “preserving and fortifying” the Deferred Action for Childhood Arrivals (DACA) program.

A separate executive order repealed a controversial travel ban policy established by former president Trump that barred nationals from a group of mostly Muslim-majority and African countries from entering the United States.

President Biden adopted a series of immigration executive orders that:

1. Revoked the travels bans, also referred to as the Muslim Ban and African Bans, previously ordered by the Trump administration and abolished the so-called “extreme vetting” practices that were hard on immigrants and led to rejected visa applications. The order also instructed the State Department to restore fairness in visa processing and remedy harms caused by the previous bans.

2. Directed an immediate halt to construction of the border wall along the U.S. Mexican border and called for a review of the legality of funding and contracting methods used by the previous administration. The order terminated the “national emergency” declaration and allowed the Biden-Harris administration to determine the best way to redirect the hundreds of millions of dollars ear-marked for border wall construction elsewhere.

3. Directed the Department of Homeland Security and the Department of Justice to take appropriate measures to fortify Deferred Action for Childhood Arrivals (DACA) and ensure that the so-called Dreamers be protected from deportation.

4. Revoked the prior Administration’s orders to exclude undocumented individuals from the census and apportionment of Congressional representatives.

5. Protected Liberians from immigration enforcement and extended work authorizations through June 30, 2022 and directed the Department of Homeland Security to facilitate processing for Liberians applying for residency in line with the Liberian Relief and Fairness Act.

Also the Department of Homeland Security issued a memorandum directing a full review of their enforcement practices and instituted a pause on deportations for 100 days while the review is conducted.

President Biden also announced his plan to send an immigration bill to Congress calling for:

1. An eight-year pathway to citizenship for all 11 million undocumented immigrants.

The bill would provide a five-year path to permanent residence for all undocumented immigrants present in the United States on January 1, 2021, followed by a three-year wait for naturalization. Certain individuals with long-standing ties to the United States and previous vetting by the government would be expedited, including over 1 million people with Deferred Action for Childhood Arrivals and Temporary Protected Status—in addition to agricultural workers.

2. Eliminating the three- and ten-year bars and expanding legal immigration.

Many immigrants who could have a chance to legalize their status may not be able to do so. This is because of penalties that prohibit green card applicants from returning to the U.S. for three or 10 years if they depart after being in the country unauthorized. And many of these people who qualify for green cards are required to apply from abroad. The new bill would reverse these bars which prevent or delay many eligible family members from becoming lawful permanent residents—even if they are already in the United States.

The bill will also make significant changes to the legal immigration system. It will recapture millions of previously unused visas to reduce green card backlogs, eliminate per-country caps on visas, and provide rapid paths to a green card for children and spouses of permanent residents. It will also prevent children of H-1B visa holders from “aging out” and being forced to leave the United States.

President Biden’s bill is different than previous efforts to pass a comprehensive bill. Since 2003, Congress has authorized over $330 billion on immigration enforcement — and the number of U.S. Border Patrol agents nearly doubled. Yet we have not seen Congress pass any measures to support immigrants in over 30 years despite having consistently expanded the enforcement system.

The president is using each day of his new leadership to focus on a different area of concern. He is expected to take further initiatives next Friday, the day that it is immigration’s turn to be dealt with again. He will focus on border processing, refugees and family unification then.

After four years of restrictions placed on immigrants by the Trump administration, it is refreshing to see such positive changes. Indeed, it’s amazing what a change in political leadership can accomplish. But it is still early. One of the major challenges Biden will face, is not to get bogged down in the Congressional gridlock that has plagued his predecessors. The upcoming impeachment trial that will require the vote of at least 17 republicans in the Senate to succeed in a conviction, could derail much of his agenda, including the immigration measures planned. Other challenges will appear. For example, already the Attorney General of Texas is threatening to sue to block Biden’s 100 day freeze of deportations policy.

So far, nonetheless, Biden is off to a good start.

Justin Timberlake's 'Cry Me a River': Watch it Come to Life in Mesmerizing Dance