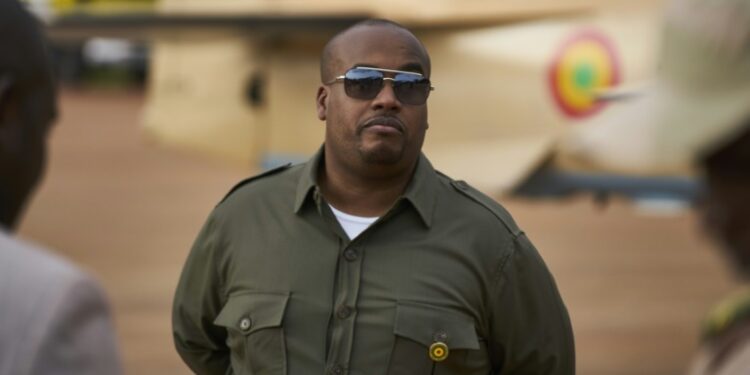 Keita, pictured in 2018 when he was head of parliament's security and defense commission | AFP

A year ago, times were good for Karim Keita.

The son of President Ibrahim Boubacar Keita had become a kingpin in Malian business and politics and gained a reputation for a freewheeling lifestyle — critics nicknamed him “Kim Jong 2.”

But in August 2020, the army ousted his father at the helm of the Sahel state and the younger Keita fled to Ivory Coast.

Today, facing demands for his arrest over the disappearance of an investigative journalist in 2016, the former princeling’s star has waned further.

The coup against President Keita, known as “IBK,” climaxed weeks of protests over a seemingly endless jihadist conflict and frustrations over corruption, of which his 42-year-old son became a symbol.

An elected MP, Karim Keita became increasingly visible by his father’s side during his presidency. His business relationships were also dogged by allegations of graft.

Then during the anti-government protests last year, footage surfaced of Karim Keita partying on a yacht with scantily clad women, provoking outrage in the poor and conservative Muslim nation of 19 million people.

He has kept a low profile since fleeing Mali.

But on Monday, he was thrown back into the public eye when judicial officials requested an international arrest warrant for him over the 2016 disappearance of journalist Birama Toure.

Toure had been working for the Bamako weekly Le Sphinx in the months before his disappearance and had reportedly been chasing a story that would have damaged Keita’s reputation.

Keita himself has always denied any role in Toure’s disappearance.

His fate now rests in the hands of the Ivorian authorities, which must decide whether to execute the arrest warrant.

Stand to attention
Born in France, Karim Keita spent part of his childhood in Mali’s capital Bamako, before taking his baccalaureate in Brussels and then studying economics in Canada.

He subsequently returned to Mali and set up a car rental firm and ran a business consultancy.

Keita remained in the background as his father gained a series of increasingly important political positions.

But after a 2012 coup that ousted ex-president Amadou Toumani Toure, he contacted the plotters and worked behind the scenes to boost his father’s prospects.

IBK was subsequently elected in 2013, the same year that Karim Keita was elected an MP.

“Without Karim, I would never have been elected,” said IBK the year he came to power.

Karim Keita began to take on a public role, becoming the chairperson of the powerful parliamentary defense committee.

He would visit troops in the field and proudly took part in a military parade showing off newly acquired helicopters.

The helicopters turned out to be defective, and Karim Keita suggested that Mali had been “cheated”. Many suspected embezzlements during the process of awarding the contract.

“He knew this and played on it. Everyone stood to attention in front of him during IBK’s time,” he said.

Several Malian officials and foreign diplomats told AFP that French President Emmanuel Macron had raised the “Karim problem” with IBK during a regional summit, suggesting that the Malian president’s unpopularity was linked to his son.

But the president later defended his son, saying he had the same rights as any other Malian.

For his part, Karim Keita always tried to distance himself from his wheeler-dealer image.

“They blame me for everything,” he once told an AFP journalist. “Some people defraud my good name”.

Two-Thirds Gender Rule: Will the 13th Parliament Comply With the Constitution?