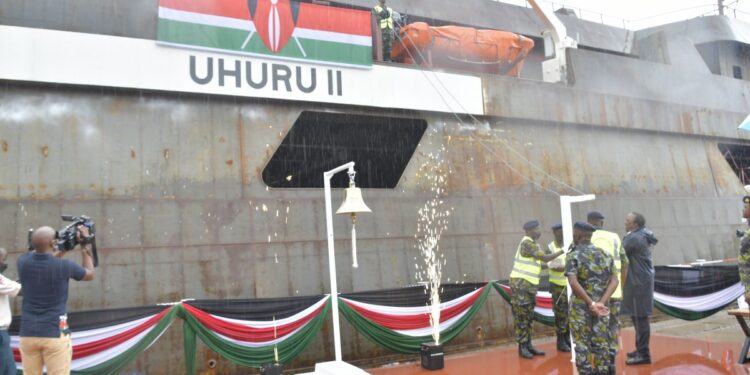 Kenya has officially joined the league of ship building countries after the flotation of the first locally built ship, MV Uhuru II on Lake Victoria waters.

The ceremony presided over by President Uhuru Kenyatta at the Kenya Shipyards Limited (KSL) in Kisumu on Tuesday comes a year after the Head of State laid the keel for the 1, 800 tonnes capacity ship.

President Kenyatta braved a chilly morning to open the valves at the dockyard to float the ship making history at the facility which was built 118 years ago.

A brief prayer was said for the ship signaling the beginning of a journey set to revolutionize maritime trade and transport in the East African region.

Kenya now joins South Africa and Egypt which are the only countries building ships on the African continent. Built by the Kenya Defense Forces (KDF) and a Dutch firm-Damen Shipyards, the 100 meters long MV Uhuru II which is nearing completion has a capacity of carrying up to 22 wagons with an estimated capacity of 2 million litres of crude oil per trip.

The vessel will complement MV Uhuru I which was built in 1965 in ferrying fuel and other products to Uganda, Tanzania and other East African countries.

Besides constructing ships, the facility, he said, will also build fishing boats, refit and service ships from government and private institutions. This, he said will enhance safety in lake transport, promote auxiliary business and tourism creating job opportunities for the youth.

The Head of State further challenged KSL to look beyond the Kenyan borders and tap into the regional market as the country angles to stamp her authority in ship building. He asked the lake region counties to take advantage of the new development to tap into the numerous blue economy opportunities.

Defense Cabinet Secretary (CS) Eugene Wamalwa said through the partnership with Damen Shipyards, key technical skills have been imparted to the Kenyan team.

Wamalwa disclosed that The National Treasury has granted KSL a Special Economic Zone Status which he said shall increase the firm’s competitiveness in the local and regional market.

The government, he added, has transferred majority shareholding of the Numerical Machining Complex (NMC) to KSL to position the company as a catalyst for industrialization through the ship building sector.