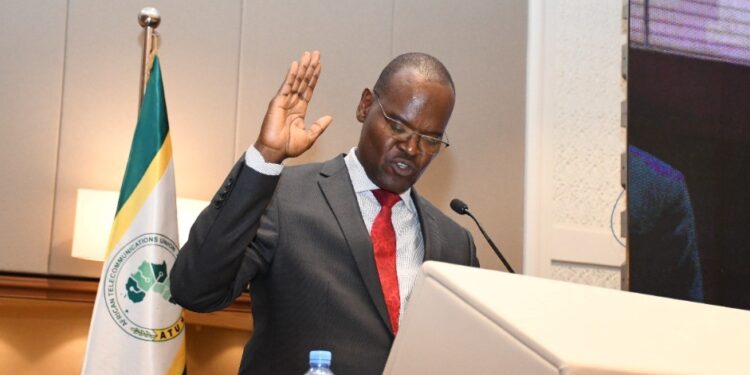 African Union’s ICT arm, the African Telecommunications Union (ATU) has announced the re-election of its Secretary General, Kenya’s John OMO to the Union for another term of four years.

Mr. OMO sailed through the elections unopposed after his only competitor, Mauritania’s Mr. Mohamed Ahmed Ould Abderrahmane stepped down.

In his acceptable speech, Mr. OMO pledged to sustain the focus of the Union’s “energies and resources to enable Africa stamp a strong footprint and authority on the global economy especially for areas that ICT can make impact.”

He thanked the Conference for the endorsement and expressed his commitment to the values of inclusivity, accountability, service and cooperation in the management of the Union and implementation of his agenda.

He also, among other accomplishments, oversaw the re-planning of FM broadcasting frequencies in Africa which has generated over 2500 channels for the continent; and, the launch of a Strategy Framework for Africa on the Migration from Internet Protocol version 4 (IPv4) to 6 (IPv6) which handles data sent over computer networks more efficiently, improves internet performance and increases internet security.

Karim Bibi TRIKI, the Algerian Minister for Posts and Telecommunications assumed the chairmanship of the Plenipotentiaries – the Union’s top organ – succeeding Kenya’s ICT Minister Mr. Joe Mucheru who has been at the helm for the last four years.

Handing over chairmanship on behalf of Mr. Joe Mucheru, Kenya’s Principal Secretary, State Department of Broadcasting and Telecommunications, Ministry of Information, Communications Technology and Youth Affairs Mrs. Esther Koimett, called on ATU Member States, Associate Members and partners to work together in the implementation of the Union’s new Strategic Plan in order to accelerate the development of ICTs in Africa.

In taking over the chairmanship, Karim Bibi Triki equally underscored the need for ICT stakeholders to collaborate more, indicating that there were already many successful home-grown cases to learn from such as ICTs and financial services.

The Conference issued the ‘Algiers Declaration’ underscoring the importance of telecommunications and ICTs for Africa’s socio-economic development and committed to work towards the sustained development of Telecommunications and ICTs infrastructure and services in accordance with the African Union’s Digital Transformation Strategy. “ICTs contribute to reducing the social and economic differences, the widening economic gap, and the gender divide at individual, national and regional levels,” part of the Declaration read.

On the fringes of the Conference, the Ministers of Algeria, Chad, Mali, Mauretania, Niger and Nigeria, signed the amended Memorandum of Understanding on the Trans-Saharan Fibre Backbone Link, committing to the development of the link across these Member States.

At the kind invitation of Isa Ali IBRAHIM, Nigeria’s Minister of Communications and Digital Economy, the Conference agreed to convene in a regular session in Abuja in the year 2026.

Wajackoyah Says He Will Execute Msando's Killers If Elected