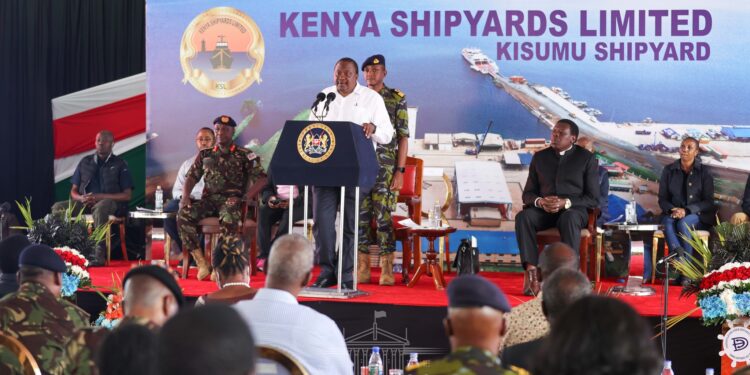 President Uhuru Kenyatta has welcomed the operationalization of Kisumu Shipyard, saying the facility will create business and job opportunities for thousands of young people in the country.

The President said the facility, under the Kenya Shipyards Limited, will encourage the growth of primary and ancillary manufacturing industries.

He pointed out that the Kisumu Shipyard will also improve transport and safety in the lake, enhance intermodal transport as well as boost fishing, tourism and other economic activities in the Eastern Africa region.

“Its catalytic effect will trigger growth of ancillary and support industries and businesses that will all have a cascading effect across the whole of the national economy,” the President said.

President Kenyatta spoke on Tuesday when he commissioned the Kisumu Shipyard in the lakeside city.

At the same time, the President witnessed the floatation of the new MV Uhuru II ferry wagon constructed by Kenyan shipbuilding experts and engineers with the support of consultants from the Damen Gorinchem, a Dutch shipbuilding and engineering company.

The 100-meter vessel with a capacity of carrying up to 22 wagons and an estimated capacity of 2 million litres of crude oil per trip is the first ship to be made in Kenya by Kenyans.

With the successful construction of MV Uhuru II ship which will be commissioned later this year at the Kisumu Shipyard, President Kenyatta expressed satisfaction that Kenya has become a pioneer shipbuilding nation in Africa.

“It is gratifying to note that during these works, young Kenyans have been empowered through the acquisition of critical skills in shipbuilding.

“Indeed, mainstreaming of the youth into the national economic agenda has been a key plank of my administration’s development plan as envisaged in the Vision 2030 and the ‘Big 4’ Agenda,” President Kenyatta said.

Referring to the official opening the Kisumu-based Dada Export Processing Zone Limited which he presided over on Monday evening, President Kenyatta encouraged the youth to focus on big ventures instead of limiting their potential.

The President commended the young Kenyan lady who owns the factory which makes garments for the export market, saying the factory has created hundreds of jobs for Kisumu residents.

“She has just started operations at her facility and in less than a month she has 150 employees from three and her target is that by December she would be an employer of three thousand people.

“That young lady previously was employing casuals, now she is employing people who are permanent and pensionable,” President Kenyatta said.

President Kenyatta pointed out that the Kisumu Shipyard will have the capacity to construct, refit, convert, repair and maintain ships as well as undertake maritime services within the Lake Victoria region and other inland water bodies.

He emphasized that the shipbuilding activities will have a broader impact on the economy including the provision of maritime assets, capabilities, technologies and skills for Blue Economy players in fisheries, maritime transport, extractive resources, marine renewable energy, tourism and maritime security.

In this regard, the President urged county governments in the Lake region to draw up strategies and take advantage of the economic opportunities spawned by the Kisumu Shipyard and MV Uhuru II.

“By so doing, it will be possible to unlock the enormous business potential that abounds within the Lake Victoria Basin; and other inland waters, create more employment and empowerment opportunities for our youth, and generate revenue for both the National Government and adjoining county governments,” he said.

To catalyse the development of the Western Kenya region, the President announced that the proposed Solar One Limited plant at Kibos in Kisumu has received the requisite Government approvals and the project implementation will commence immediately.

“This project is part of other ongoing reforms in the energy sector, which will position Kenya as a global leader in green energy,” President Kenyatta said.

Defence Cabinet Secretary Eugene Wamalwa said the floatation and subsequent commissioning of MV Uhuru II will have an immediate impact of increasing the volume of petroleum products being transported to Uganda from Kisumu while at the same time generating more revenue for the Government and creating jobs for the youth.

Chief of Defence Forces General Robert Kibochi thanked the teams of engineers and technicians both from Kenya and the Damen Gorinchem company of the Netherlands who worked tirelessly without a break to deliver MV Uhuru II project in less than one year.

General Kibochi noted that ordinarily, the project would have taken three years to complete.