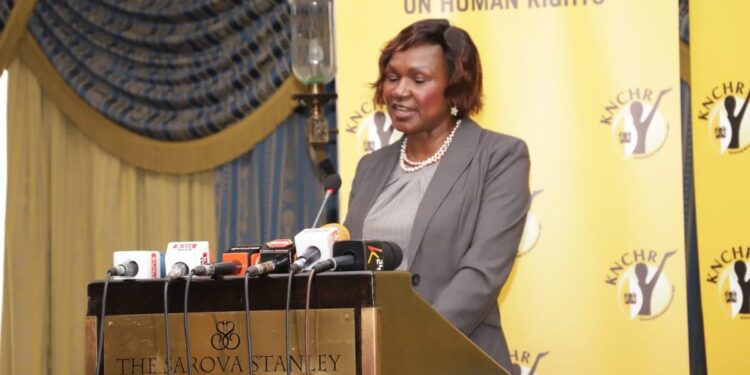 The Kenya National Commission of Human Rights (KNCHR) has launched a monitoring report of 2022 Kenyan elections dubbed ‘Demystifying our democracy: Towards a Human Rights Compliance’.

KNCHR has been monitoring the 2022 election cycle for slightly over eight months (since December 2021- June 2022) with the main aim of promoting and protecting human rights before, during and after the general elections.

According to the reports read by the KNCHR Chairperson Roseline Odede, Kenya has made enormous strides as a country in improving elements of the election process.

On the positive strides, the Commission acknowledged and commended the Independent Electoral and Boundaries Commission (IEBC) for putting in place systems that ensured a more robust counting, tallying, transmission and announcement of the results process.

“We however find that the elections were comparatively, in relations to past elections, more efficient and transparent, with fewer human rights violations,” said Odede.

The report, according to Odede, highlights an increase in the number of independent candidates elected and in relation to special interest groups, the Commission lauds the voters for electing an increased number of women, youth and persons with disabilities.

Furthermore, the report recorded a substantial drop in the number of lives lost compared to 2017. However, other violations such as assaults, intimidation, harassment, voter bribery and misuse of children are still a great concern.

The Chairperson stated that approximately over 8 million registered voters did not participate in the polling process which shows a worrying trend that needs to be probed further for the sustenance of Kenya’s democracy.

“There is a need to reform issues on voter turnout, voter registration, need to ease transfer of vote, training of polling station officials and political party formations,” reiterated Odede.

Odede stated that the Court’s jurisprudence evolved in the 2022 election cycle as attested in the report albeit some court decisions being given very late with full knowledge of their impact on the planning and logistics of the election by the IEBC.

She acknowledged and applauded security agencies for carrying out their work in the manner that adequately facilitated the right to vote and be voted for.

“The security agencies were very responsive and managed to contain several incidents of violence and were quite professional and humane in their line of duty,” stated the Chairperson.

In a speech read on his behalf by the Deputy Commission Secretary of IEBC Mr. Obadiah Keitany, the Chairman said the commission developed the strategic plan 2020- 2024 to whose focus are strengthening corporate governance, strengthening the legal framework, effective conduct of elections and equitable representation.

“To operationalize the strategic plan, the commission developed the Election Operation Plan (EOP) that set out the implementation and co-ordination framework for General Election 2022,” stated Chebukati.

Speaking at the event, The Director Corporate Communications/ Spokesman of the National Police Service Bruno Isohi Shioso, stated that the police service was well coordinated and put in place a mechanism mandated to boost the election security provision.

He added that they were readily prepared for 2022 general elections and took the process more seriously in comparison to past elections in a row.

“We audited our performance from past elections, gaining insights and learning lessons from where we did well and where we might have failed as we incorporated the best lessons into our operational doctrine,” said Shioso.

Shioso stated that from the positive outcome in the report, the police service is glad that observers, partners and the general public took note and appreciated its contribution.

The report conclusively provides strong recommendation to duty barriers which if acted upon will usher in a new dawn ensuring elections are held against a strong backdrop of the rule of law, respect for human rights, progressive reforms and a peaceful environment.

Grief and Outrage in Gambia Over Cough Syrup Deaths