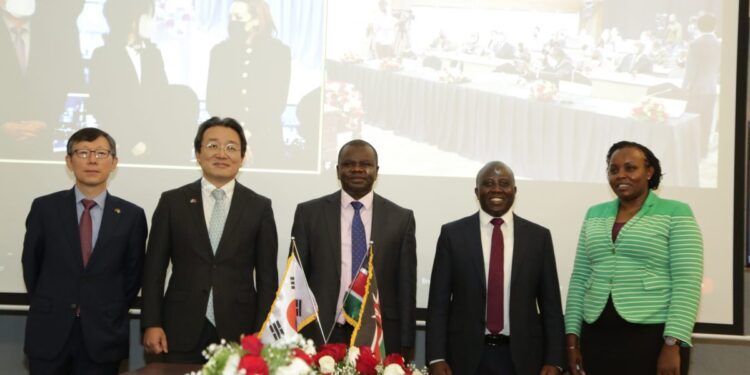 The three-year partnership aims at facilitating the consultation and co-operation between Kenya and South Korea by establishing a master plan for the development of Konza Technopolis Smart City.

The signing was presided over by the Principal Secretary, State Department for ICT and Innovation, Mr. Jerome Ochieng, for KoTDA and witnessed by the Korean Ambassador to Kenya, Koh Jae-Myong, at a meeting held in Nairobi.

The signing comes a year after a proposal titled “Establishing strategies for developing a smart city infrastructure at Konza Technopolis,” submitted in March 2021, was approved by the Ministry of Economy and Finance (MOEF) of the Republic of Korea and allocated to KOTRA as the implementing agent.

Ochieng said the programme will see the establishment of a smart city vision, concept, and step-by-step development plan based on the Konza Technopolis’ Smart City Master Plan.

“This strategy will guide the development of preliminary feasibility studies of major projects in Konza Technopolis, which include an Integrated Control Centre, smart mobility and energy,” said Ochieng.

He said the programme will focus on security operations that will be located in the modern police command centre. Other works that will be undertaken include the formation of a transportation network and plans for smart mobility based on an integrated public service transportation system that meets urban functions and characteristics, smart parking, digital signage and electric vehicle service.

Ochieng said the Ministry of ICT looks forward to accelerating the impact of Konza Technopolis Second Strategic Plan 2021- 2025 that is currently under implementation.

“The Institute will exemplify the Centre of Excellence in science and engineering as envisioned in the second and third medium term plans of the Kenya Vision 2030,” said Ochieng.

He added that the ground works on the construction of KAIST-Kenya have already commenced and is expected to be complete by 2024.

Koh Jae-Myong, the Korean Ambassador to Kenya, said that Konza Technopolis is one of the many partnerships between Korea and Kenya and noted that his government will continue to support its partners in economic projects.

Kenyan Ambassador to Korea, Mwende Mwinzi, said Kenya appreciates the tremendous support on the KOTRA project under the Ministry of ICT whose completion will spur economic prosperity of the nation. (KNA)

ODM Is a Commercial Asset – Kidero to Babu, Ledama