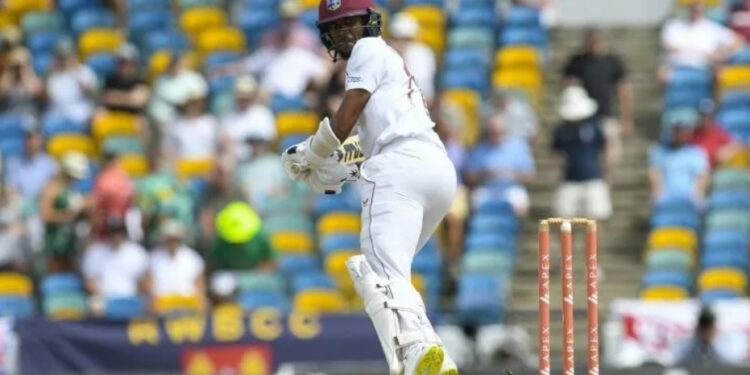 874
SHARES
4.3k
VIEWS
Share on FacebookShare on TwitterShare on WhatsApp

England eventually removed nightwatchman Alzarri Joseph, but Kraigg Brathwaite continued to anchor the West Indies response to the tourists’ formidable first innings total as they reached 351 for five at lunch on the fourth day of the second Test in Barbados on Saturday.

Brathwaite was unbeaten on 145 at the interval in partnership with Jason Holder (12 not out), with the home side still 156 runs behind their opponents’ effort of 507 for nine declared.

His 10th Test hundred has now occupied more than 10 hours in which he has faced 444 deliveries, stroking 16 fours.

On a surface playing slower and lower with every passing day, inhibiting both the bowlers and batsmen as far as playing attacking cricket, West Indies plodded along through 34 overs in advancing their overnight total of 288 for four by another 63 runs.

Having done his job late on the third day when he came in at the fall of Jermaine Blackwood’s wicket for 102, Joseph continued to look comfortable at the crease in a fifth-wicket partnership with his captain which put on 52 runs.

With two half-centuries in Test cricket to his name, the fast bowler would have had his sights set on another useful innings, but his ambition got the better of him midway through a session that was twice interrupted by light showers on a breezy, overcast morning.

Dan Lawrence, who contributed an attacking 91 to England’s batting effort on day one and got the wicket of Blackwood with his occasional off-breaks on Friday, showed sharp reflexes and a safe pair of hands to take the catch at gully as Joseph, on 19, sliced a forcing off-side shot off Ben Stokes.

It was the all-rounder’s second wicket of the innings, although like all the other bowlers so far in this match, he found work extremely tough on a surface which appears to have doomed this fixture to a draw much in the same way of the first Test in Antigua

There’s More to an Election Than Mere Voting

Report-Nairobi Population to Rise to Over 10 Million by 2050