by Linda Amiani
in News, Technology
0 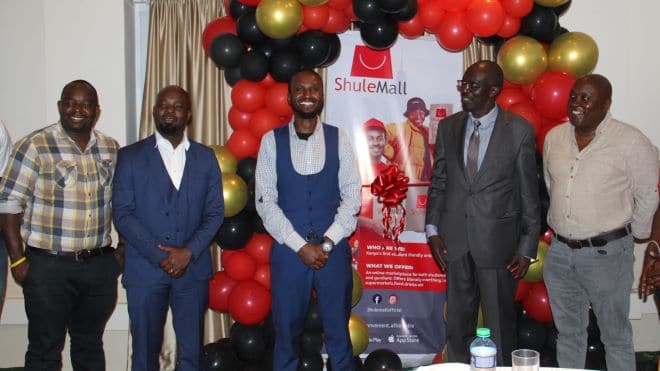 A group of Kenyan college students have rolled out an online shopping space targeted at learners.

The e-commerce platform, Shule Mall, which was launched on Tuesday in Nakuru, was developed by Jomo Kenyatta University of Agriculture and Technology (JKUAT) student Wilfred Chege.

It is designed to facilitate the purchase and sale of learning materials, related services and other requirements online from textbooks stores, uniform dealers and supermarkets for students in secondary schools, tertiary institutions and universities.

Chege has brought on board 16 fellow students drawn from various universities, Technical Vocational Education Training Institutions (TVETS) and polytechnics to oversee the successful rollout of the platform.

The Fourth-Year student said entrepreneurs may add their students-specific outfits to Shule Mall by logging in and filling in information on their businesses such as location, contact details – including links to website and social media pages, opening and closing hours and a description of items they sell and their prices.

“We know that this platform both on iOS and Android has a huge potential, but like any other business, resilience and commitment should be our guiding factors. You first make your name before profits,” said Chege.

“Our focus now is on optimising Shule Mall’s features and creating more to keep users coming back,” he indicated of their short term plans.

Chege markets Shule Mall through social media platforms and plans to enlist 300,000 businesses on the platform by the end of this year.

“Students in boarding facilities far from their homes can also purchase public service vehicle tickets and air tickets online to facilitate their movement to and from their respective institution,” he added.

The online shopping mall features Safaricom’s Mpesa, cash on delivery and E-wallet as modes of payment.

“The platform features an E-wallet where once a parent loads cash, the targeted student is able to access goods and services from enlisted entrepreneurs. We are in talks with financial technology companies to expand modes of payment,” he said.

He allayed fears that the learners could use the platform to acquire illicit goods.

For students under 18 years, he said, Shule Mall has been equipped with security features to ensure that they do not use the platform to purchase items prohibited in schools including mobile phones, casual wear or illegal substances such as drugs and narcotics.

“For those over 18 years, the range of products they can purchase is broader and includes apparel, jewellery, drinks and beverages, electronic items among others. We will also use site traffic for advertisement revenue from corporates and advertisers,” he said.

While presiding over the Shule Mall’s launch, Rift Valley Institute of Science and Technology (RVIST) Principal Sammy Chemoiwa said the innovation has gone through an incubation cycle and advised inventors to patent their products.

“If students in TVETs, polytechnics and universities are equipped with sufficient practical skills, Kenya will be able to do business and compete globally in the technological arena,” Dr Chemoiwa said.

He added that the National Government had revised its policy to ensure that five per cent of TVETs, polytechnics and universities’ budget was channelled into innovations and incubations.

Laikipia University don, David Thuruthi, urged policymakers to work with telcos and ensure the cost of internet connectivity is not only brought down but coverage is extended to schools particularly in rural areas for such innovations to take root.

According to a report on the country’s Digital Economy by a global advisory firm, Dalberg, only 13 per cent of Kenyans are using e-commerce platforms such as Jumia and Kilimall to sell and buy products, underpinning the use of social media networks by marketers and shoppers.

The report indicates that retailers and shoppers prefer social sites that support direct marketing, engagement between businesses and buyers, and goods are paid upon delivery.

The rate of adoption of online marketplaces in Kenya remains slow due to high delivery costs, highly fragmented markets and ambiguity in streets and building naming leading to supply chain barriers, according to a report by the Communication Authority of Kenya.

From message to violence: what to watch for in the media ahead of Kenya’s elections