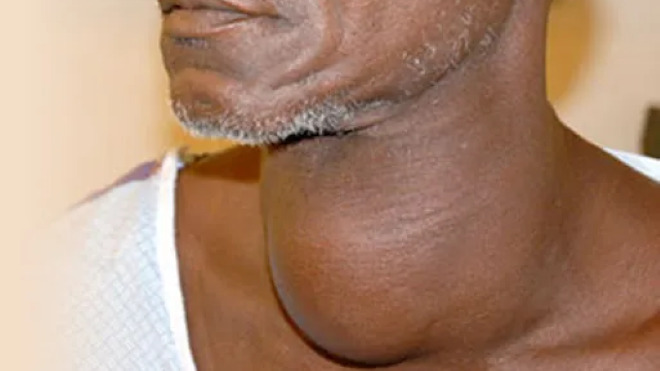 Medical Practitioners in Kericho County are raising concern over high cases of goiter in the region and want residents to use iodized salt as a preventive measure.

Resident surgeon at the AIC Litein Kericho Annex Clinic, Philip Blasto, said the medical facility is treating almost 40 goiter patients from Bomet and Kericho counties during their routine weekly outreach programmes, an indicator that the disease was on the high in the area.

“In Kericho and Bomet, the clinics are run twice a week and 30 to 40 patients have been diagnosed with a goiter, an enlargement of the thyroid gland. We sometimes operate on eight patients in a week who require surgery,” Dr Blasto said.

Speaking during a thyroid clinic at the center, he said consumption of iodine in foodstuffs minimizes the risk of developing goiter, which left untreated can cause complications such as difficulty in swallowing and breathing.

“Iodine is an essential mineral for thyroid regulation and failure to consume adequate amounts could result in long term thyroid problems, notably goiter and hypothyroidism, where the thyroid gland cannot produce and release enough hormones for normal functioning of metabolism,” he said.

Goitre is an enlargement of the thyroid gland which makes hormones that help control many vital functions in the body.

The gland is at the front of the neck just below Adam’s apple and it can expand well beyond its typical size and cause a noticeable bulge in the neck, which is noticeable when a patient is swallowing or speaking.

The medic recommended intake of iodine in diets to regulate thyroid functions, adding that iodized salt is a common source of the same.

“What has been shown to reduce the occurrence of goiter is taking iodinated salt. It is important for people to take iodinated salt in their diets,” Dr Blasto said, adding that a majority of the patients are women.

He advised personal health checks for early detection of the disease which can be treated quickly avoiding any complications, adding that those who undergo surgery experience pain including difficulty in swallowing or breathing.

“The easiest way to check if one has a goiter is to stand next to a mirror and put some water in your mouth and swallow. If you see something prominent coming in as you swallow, then probably that is a goiter.

The other is from people telling you that your neck seems to look enlarged. For a big thyroid gland, the risk of developing complications during surgery is very high.

Early detection gives the patient the best chance of getting the right treatment quickly. Some patients come in after 10 to 25 years with goiter, hence the high risk of developing complications,” he said.

A goitre survivor Richard Serem, 65, said he lived with the ailment for 15 years during which time he experienced excruciating pain and coughing, which was also accompanied by extreme fatigue and breathing difficulties.

Serem underwent successful surgery in July 2021 and is now happy to resume his farming chores while in good health.

“I recovered from surgery within a day and I am happy the hospital came to my aid. All my efforts to treat the condition using traditional herbal medicine were fruitless. Walking a short distance of 100 metres would leave me breathless and fatigued, which was a common feature in my life, besides experiencing a lot of pain and coughing,” said Mzee Serem.