Moroccan teens ready to give up everything to reach Europe 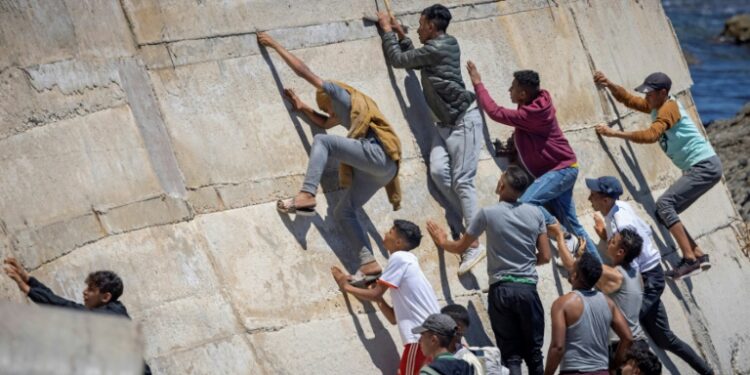 Moroccan high school student Mohamed, 17, dropped everything — his studies, his final exams, even his family — to try to reach the Spanish enclave of Ceuta, like countless other youngsters who see no future in the North African country.

Since Monday, more than 8,000 would-be migrants, many of them unaccompanied minors, have managed to scramble, wade or swim across the border in search of a better life in Europe.

Most have been sent straight back by the Spanish authorities, who have been angered by the blind eye turned by Moroccan border guards as the youngsters streamed across to the tiny enclave of 84,000 people.

But with already limited job prospects for school leavers greatly reduced by the Covid pandemic, many of the young returnees are determined to try again, and there are thousands more eager to follow in their footsteps.

Youth unemployment in Moroccan cities reached 40 percent last year, according to official figures, and many young people barely get by doing odd jobs.

Abdellah, 16, was sent back to Morocco by the Spanish authorities on Tuesday.

“My mother hasn’t stopped ringing me to beg me to return home, but adventure holds no fear for me,” he said.

The teenager, who said he dropped out of school two years ago and has been getting by working in a mechanic’s workshop in Tangier, said he has enough money to stay a few more days in the Moroccan border town of Fnideq and intends to try his luck again getting across.

His friend Hassan, 17, said he had decided to go home to Tangiers for now. He still dreams of living in Europe but doesn’t want to take the risk of setting off right away.

Others travelled to Fnideq from further afield after hearing news of this week’s mass crossing.

“I have no future here. I want to work to help my family,” said Mohammed, who arrived in the border town on Wednesday after a long journey on foot.

Anxious parents
As Spain pressed on with its mass repatriations, anxious parents gathered on the Moroccan side of the border desperate for news of their loved ones.

“Another girl said she saw her in Ceuta but I have no news and nobody knows anything.”

Another woman who gave her name only as Ouafa acknowledged that at first she wanted her 15-year-old son to succeed in reaching Ceuta.

But in the end she had been “relieved” to be reunited with him after rushing to the border from the port city of Tangier.

Human rights activist Omar Naji said the striking number of teenagers among the would-be migrants was a first.

He was deeply critical of the treatment of the youths by both the Spanish and Moroccan governments.

“Their expulsion by Spain runs contrary to international treaties on the rights of the child,” he said.

“The Moroccan authorities used them to put pressure on Spain for political purposes.”

His allegation against the Moroccan authorities has been echoed by the Spanish government.

“We are not talking about youths aged 16, 17 — children as young as seven or eight were allowed through according to NGOs … ignoring international law,” said Spanish Defense Minister Margarita Robles.

“Call it what you want but I call it blackmail.”

Analysts said it was clear Morocco had turned a blind eye to the flow of people entering Ceuta in order to put diplomatic pressure on Spain to recognize its sovereignty over Western Sahara.

The influx comes against the backdrop of increased tensions with Morocco over Spain’s decision to provide medical treatment for the leader of the Polisario Front.

The head of the Western Sahara independence movement has been seriously ill with Covid-19.

Clashes on Morocco border as Madrid accuses Rabat of 'blackmail'