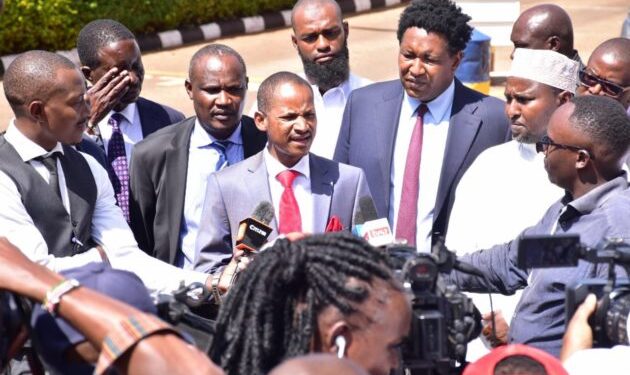 Mps Junet Mohamed and Babu Owino on Tuesday recorded statements at the Directorate of Criminal Investigations (DCI) over an incident in Uasin Gishu where a chopper belonging to Orange Democratic Movement (ODM) leader Raila Odinga’s was stoned and destroyed.

The two lawmakers arrived at the DCI headquarters at about 12.30pm where they recounted their recollection of the incident.

“Honoured DCI summons. Gave them information I hope will be useful in their investigations over the recent stoning of Rt. Hon. Raila Odinga chopper in Uasin Gishu. We expect expeditious conclusion of this matter,” Junet stated on his twitter account.

He further stressed that there should be no ‘political zoning’ in Kenya.

“We shared with the police what we know and we hope that they will take the necessary action because this is a very serious matter,” he stated.

The two legislators were accompanied by others who included John Mbadi, Ledama ole Kina, Gladys Wanga, and others.

“This isolated incident should not make our supporters act differently, Continue being civil, conduct your self with decorum, we do not want this country to burn,” Mbadi stated.

“On that day we saw death and it has a very bad face and no one should be in such a situation,” Owino added.

Police have summoned several leaders from the region, among them Uasin Gishu Governor Jackson Mandago, Soy MP Caleb Kositany and Kapseret MP Oscar Sudi for questioning over the incident.

Although no one was hurt in the attack that occurred as Raila headed for the funeral of tycoon farmer Jackson Kibor, President Uhuru Kenyatta has warned that “Kenya could have degenerated into chaos” were he to be harmed.

Odinga is vying for the presidency to succeed president Kenyatta in the August election in what has put him in conflict with Deputy President William Ruto who is also eying the seat. Both did not attend the funeral that could have had them share a platform in recent weeks when they have gone on an all-out tirade against each other as they campaign in various parts of the country.