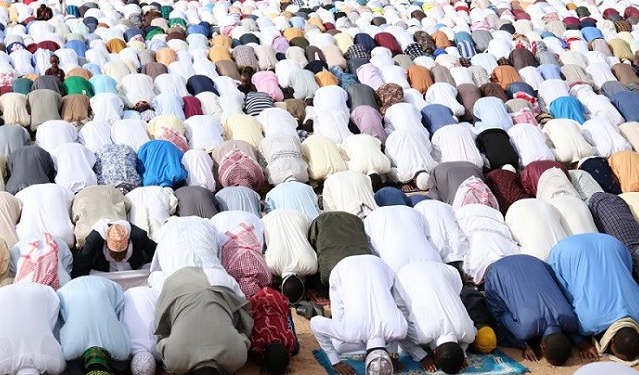 The Islamic traditional prayers referred as ‘Special Prayers’ for rain (salat al-‘istisqa) are performed to seek God’s intervention during drought, when rain fails resulting in severe crisis to all living things.

Sheikh Juma Omar led the prayer session where the faithful invoked God for rains and ending the drought that has ravaged the country causing untold sufferings, deaths of animals and crop failure.

The Muslim faithful also prayed for the peace and security to prevail throughout the current electioneering period in the country.

They observed that Kenya has been an oasis of peace and challenged politicians to conduct themselves soberly and peacefully throughout the electioneering period.

“We appeal to the political class to desist from acts of lawlessness in their public campaigns. They should demonstrate a sense of oneness because Kenya will remain after the August elections,” remarked Sheikh Ngao, further urging the diverse Kenyan communities to be committed to peace and pray against any unforeseen eventualities.

The Muslim cleric said elections need not to be a ‘matter of life and death’ and thus, should not bring about undue tension and fear in the country.

On his part, Sheikh Omar urged Kenyans to continue praying for peace to prevail in the country, adding that the country’s interest is more important than the interests of a few individuals.

“Let us also pray for our motherland and as citizens we have the responsibility to play individually and collectively to ensure there is sustainable peace,” he added.

The clerics also called upon the media not to allow politicians to use their various platforms to spread negative ethnicity and animosity.

“We are calling the National Intelligence body to monitor all the political debates in radio stations to censor those who could be propagating political animosity through the media,” added Ngao.

“During this Holy Month of Ramadan, let us unite. We should also take part in discussions that would contribute to our development agenda. Most importantly being the election period, let us not elect leaders who will perpetuate corruption and other vices to our country,” implored Zuberi.

The religious leaders also urged their colleagues to continue to serve as agents of peace, reconciliation, cohesion, integration and guide the nation in the right direction.

The Muslim clerics also appealed to the rich in the community to give charitably to the less fortunate during the fasting period.